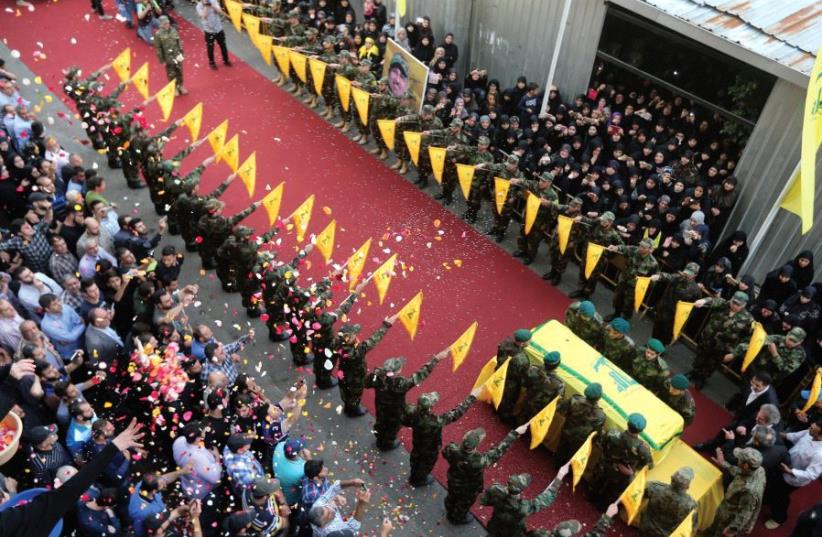 PEOPLE TOSS rose petals as Hezbollah members stand near the coffin of top Hezbollah commander Mustafa Badreddine, who was killed in an attack in Syria last year
(photo credit: REUTERS)
Advertisement
On Friday, the UK-based website Al-Araby Al-Jadeed reported that a source close to Hashd al-Shaabi (PMU), a collection of Shi’ite militias affiliated with the Iraqi government, had said a Hezbollah commander was killed fighting against Islamic State in Iraq.According to the report, Abdul Hamid Mahmoud Shri was killed alongside four other Shia fighters near Ba’aj by a suicide bomber. Shri’s body was flown via Najaf to Beirut.“This is the third Hezbollah [member] killed in Iraq battles this year... the Iraqi government continues to deny the participation of Hezbollah elements in battles for Mosul,” the website noted.The death of Lebanese Hezbollah fighters in Iraq would mark an escalation in Iran’s role in Iraq and its ability to knit together Shi’ite militias aligned with the Iranian Revolutionary Guard Corps. It is more evidence that Hezbollah, which is already a major military force in Lebanon and Syria, and has tentacles in Africa and South America, is expanding its influence to Iraq.David Daoud at the Long War Journal website wrote in January that PMU commander Abu Mahdi al-Muhandis had confirmed the presence of Hezbollah in Iraq. His units had “benefited greatly” from Hezbollah’s role, Muhandis told Al-Mayadeen media. According to Daoud he also mentioned the part Hezbollah leaders Imad Mughniyeh and Mustafa Badreddine, both of whom have been assassinated, played in opposing Saddam Hussein in the 1980s when Muhandis was fighting alongside the Iranians. Hezbollah played a role after 2003 in instructing Iraqi Shi’ite militias such as the Kataib Hezbollah brigade.When news of Shri’s death hit Twitter on Friday, it came amid reports of a major PMU offensive that had reached the Iraq-Syria border. Initial tweets claimed he had died in the “Syrian desert” or “Badiat al-Sham.” The desert includes parts of western Iraq, but pro-Syrian rebel accounts such as @rSyrianrebels interpreted it to mean Shri, who is confusingly also known as “Abu Mahdi” and whose name is sometimes spelled Sharri, was killed fighting against the Free Syrian Army in Homs.Al-Masdar News, which is generally seen as pro-Syrian regime, reported on Thursday that Shri “died after sustaining serious wounds from battles against ISIS in Qayrawan in West Nineveh [Iraq] Governorate.” It seems increasingly likely that Shri was killed in the PMU offensive; the time of his death and accounts of it between Qairawan and Ba’aj link to the time of the Shi’ite militia offensive in that area.That Hezbollah is present in Iraq is not a new phenomenon, but any increase in its relations with the PMU take on more weight today because the Shi’ite militias in Syria and Iraq are on the verge of linking up on the ground as the Syrian regime advances east and the PMU advances west, filling the void left by the defeat of remnants of ISIS. This potentially creates a land corridor between Tehran and Beirut, one that policy-makers and commentators have warned about. It threatens Israel and shows that as the Syrian civil war winds down, the threat and power of Hezbollah continue to overshadow the Galilee. The idea that Hezbollah would reduce its presence in Syria after the war seems remote if it is playing a role in neighboring Iraq.
Hezbollah says future war with Israel could take place in Israeli territory (credit: REUTERS)
Hezbollah is dwarfed by the Shi’ite militias in Iraq, which number up to 100,000 fighters. Hezbollah, according to a 2014 study by the Institute for the Study of War, has only 5,000 fighters and 15,000 reservists, hundreds of whom have died in Syria.So why would the PMU need Hezbollah’s help in its battles west of Mosul? It doesn’t, but the presence of Hezbollah commanders is symbolic. Shri posed for a photo with Qasem Soleimani, the head of the Revolutionary Guards’ Quds Force. It is part of Iran putting its stamp on operations from Beirut to Baghdad. Much of this exists in the shadows, with rumors of sightings of Hezbollah members or commanders or photos posted online whose location is unknown, except when they are killed in action.