The meetings came after the Iranians released photos of their top delegates sifting through stacks of papers, taking phone calls and working on laptops, all wearing large smiles. 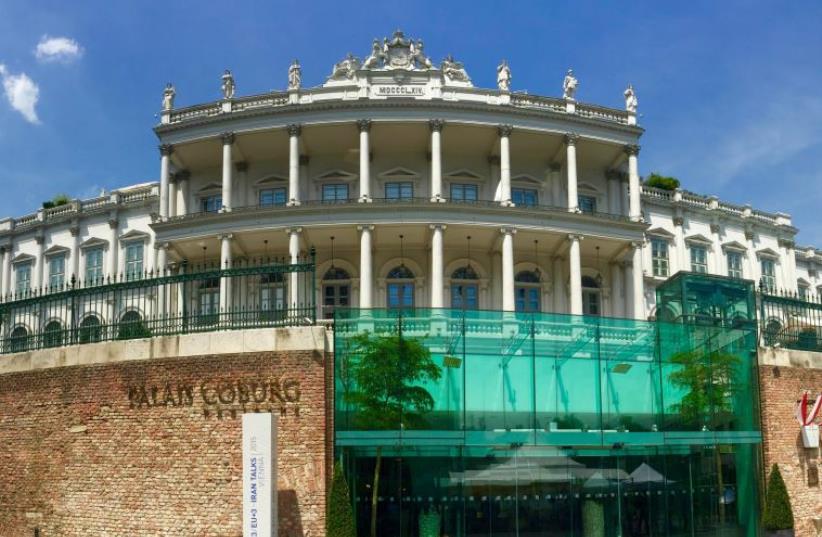 The Coburg Palace in Vienna on June 30, where diplomats from Iran and world powers are meeting over a comprehensive nuclear agreement.
(photo credit: MICHAEL WILNER)
Advertisement
VIENNA -- Negotiations over Iran's nuclear program appear to have reached their penultimate moment as Tehran's nuclear chief, Ali Akbar Salehi, declared "good news" to gathered press on Saturday night.Entering the Palais Coburg in Austria's capital, where the talks have taken place for fifteen straight days, Salehi spoke after Iranian officials briefed their press corps on the importance of the night ahead. Iranian Foreign Minister Mohammad Javad Zarif met with US Secretary of State John Kerry for an hour and a half this evening, which was followed by a full plenary of diplomats from world powers— the US, Britain, France, Russia, China and Germany— that went through midnight.The meetings came after the Iranians released photos of their top delegates sifting through stacks of papers, taking phone calls and working on laptops, all wearing large smiles.The American delegation has been largely silent, though earlier in the day, Kerry sent out a message on Twitter suggesting that more work needed to be done to resolve some "difficult issues."Drafting of the deal's text is said to be complete, according to the EU's foreign policy chief. Going into consequential talks on Saturday night, all that was left, it appeared, was a small set of political decisions to be settled by all sides.In a briefing by their delegates, Iranian journalists were told that specific language for a key United Nations Security Council resolution still proved a political challenge in the eleventh hour of the negotiations. The Jerusalem Post was not represented at the briefing and cannot independently verify the reports."Now that everything is on the table, the moment has come to decide," Fabius said, exiting a meeting with Kerry earlier in the evening.World powers seek to cap, restrict, monitor and partially roll back Iran's nuclear work in exchange for permanent sanctions relief. Iran wants that relief immediately.Israel opposes the deal in its current form.