Molavi Abdolhamid said it was wrong for the hardline judiciary to charge protesters with "moharebeh" - an Islamic term meaning warring against God.

By REUTERS
People light a fire during a protest over the death of Mahsa Amini, a woman who died after being arrested by the Islamic republic's "morality police", in Tehran, Iran, September 21, 2022.
(photo credit: WANA (WEST ASIA NEWS AGENCY) VIA REUTERS/FILE PHOTO)
Advertisement

A prominent Sunni cleric said on Friday it was wrong to charge protesters with capital offenses as renewed demonstrations shook Iran's restive southeast in the third month of protests despite a violent state clampdown.

Videos posted by the Iran Human Rights group showed minority ethnic Baluch women chanting "I will kill whoever killed my brother", and police shooting what it said was birdshot and teargas at demonstrators. Another unverified video showed injured protesters treated at a makeshift clinic in a mosque.

Molavi Abdolhamid, a powerful dissenting Sunni voice in the Shi'ite-ruled Islamic Republic, said it was wrong for the hardline judiciary to charge protesters with "moharebeh" - an Islamic term meaning warring against God - which carries the death penalty.

"A person who has protested with stones and sticks or just by shouting should not be accused of moharebeh. What the Koran calls moharebeh is when a group uses arms and engages (in fighting)," Molavi Abdolhamid said in a Friday prayers sermon, according to his website.

Besides Zahedan, the capital of Sistan-Baluchistan province where Molavi Abdolhamid spoke, protests were held in Chabahar, Taftan and other parts of the impoverished province, according to videos posted on social media. Reuters could not verify the footage. 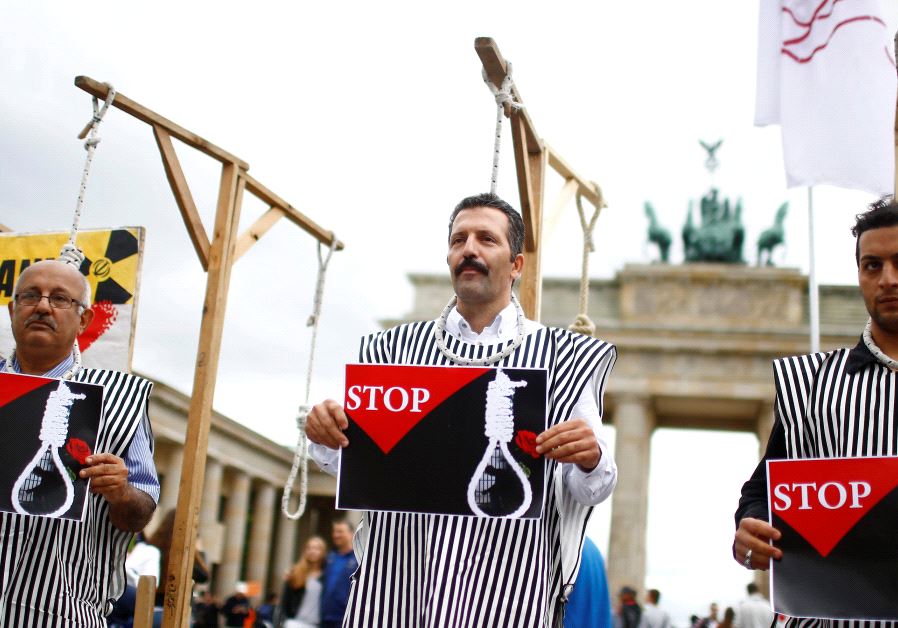 People stage a protest against the execution by Iran of up to 20 Kurds. (credit: REUTERS)

On Tuesday, Javaid Rehman, a UN-appointed independent expert on Iran, voiced concern that the repression of protesters was intensifying, with authorities launching a "campaign" of sentencing them to death. Read full story

Already, 21 people arrested in the context of the protests face the death penalty, including a woman indicted on "vague and broadly formulated criminal offenses", and six have been sentenced this month, Rehman said.

The United Nations says more than 300 people have been killed so far and 14,000 arrested in protests that began after the Sept. 16 death in custody of 22-year-old Kurdish woman Mahsa Amini.