The Khums (meaning fifth in Arabic), is a tax mentioned in the Koran and consisting of 20% of a person's excess earning. The money is donated to poor and orphans, as well as to Islamic institutions. 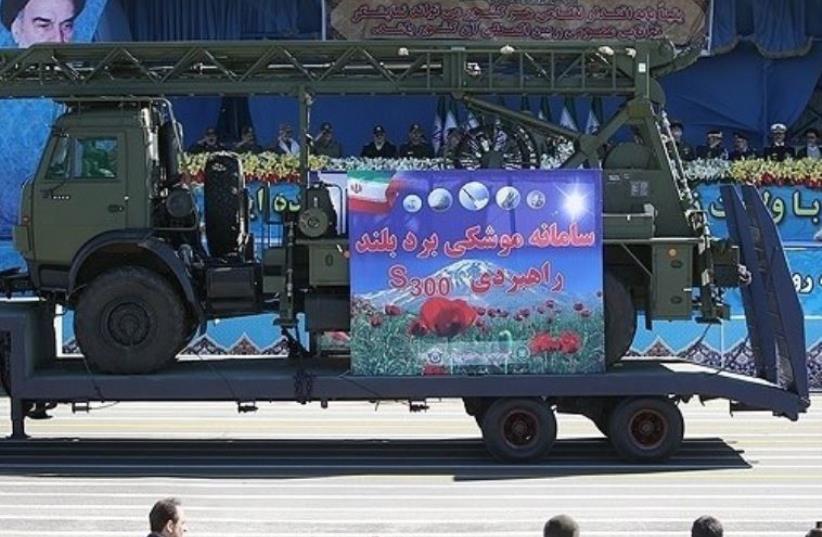 Iran displays parts of S-300 air defense missile system imported from Russia in parade on "National Army Day."
(photo credit: FARS)
Advertisement
The age-old Sunni-Shi'ite split is now the underlying cause of a new Sunni outcry against the expansionist policy of Iran in the Middle East.A social media campaign launched recently by Sunni Muslims seeks to protest over the transfer of a religious tax payed by Shi'ites living in the Gulf to the main centers of Shia scholarship in Iran and Iraq.The Khums (meaning fifth in Arabic), is a tax mentioned in the Koran and consisting of 20% of a person's excess earning. The money is donated to poor and orphans, as well as to Islamic institutions.According to the Koran, the Khums should be collected by the Imam Mahdi (the Shi'ite messiah). However, because the day of judgement has not yet arrived, the religious establishment in Iran is the one getting the money.Since these endowments arrive directly to Iran's Supreme Leader, Ayatollah Ali Khamenei, without any supervision by Iranian state institutions, they are allegedly used for political purposes and not for religious and moral ones, as the Koran obligates.According to Arab media reports, hundreds of millions of dollars payed annually by Gulf Shi'ites to the religious scholars in Qom (the major Shi'ite center in Iran) are transferred to Iran's militias in Iraq and Syria, which are fighting the local Sunni population.The Khums is also a major income source for Hezbollah. In 2005, then-Hezbollah spokesman Hussein Nabousli proudly declared that most of the organization's revenues come from Khums. Since this money is not circulated in the international financial system, it helped the Iranian regime withstand the financial sanctions that were imposed on it by the West, providing it with liquidity.In light of Iran's expansionist policy in the Middle East, Sunni social media activists are now calling on governments in the Gulf to prevent the transfer of the money collected from Khums to Iran and obligate Shi'ites to pay this money to the states they are living in.The standard-bearer of the Sunni campaign is Khaled Alkami, a well-known Saudi political analyst, who wrote on Twitter a series of comments under the hashtag: "the transfer of Khums to Iran is terror.""Sending money, under any name, to the thug state of Iran, is the same as sending money to al-Qaida, ISIS or Hezbollah, and it should be designated as 'terror funding,'" Alkami said."If sending money to a state with which we are in a state of war, like the devil state of Iran, is not a betrayal, then what is a betrayal?" he continued.