European officials have balked at the proposed changes to a painstakingly drafted text that they say is 70-80% finished.

Indirect U.S.-Iranian talks on salvaging the 2015 Iran nuclear deal teetered on the brink of crisis on Friday as they broke off until next week with European officials expressing dismay at the demands of Iran's new hardline administration.

The seventh round of talks in Vienna is the first with delegates sent by Iran's anti-Western President Ebrahim Raisi. His election in June caused a hiatus in the talks of five months, heightening suspicions among U.S. and European officials that Iran is playing for time while its makes nuclear advances.

The Iranian delegation under nuclear negotiator Ali Bagheri Kani has proposed sweeping changes to the text of an agreement negotiated in previous rounds, diplomats said. European officials have balked at the proposed changes to a painstakingly drafted text that they say is 70-80% finished.

"Over five months ago, Iran interrupted negotiations. Since then, Iran has fast-forwarded its nuclear program. This week, it has back-tracked on diplomatic progress made," senior officials from France, Britain and Germany said in a statement, adding that Iran was demanding "major changes" to the text.

It is "unclear how these new gaps can be closed in a realistic time frame," they added. 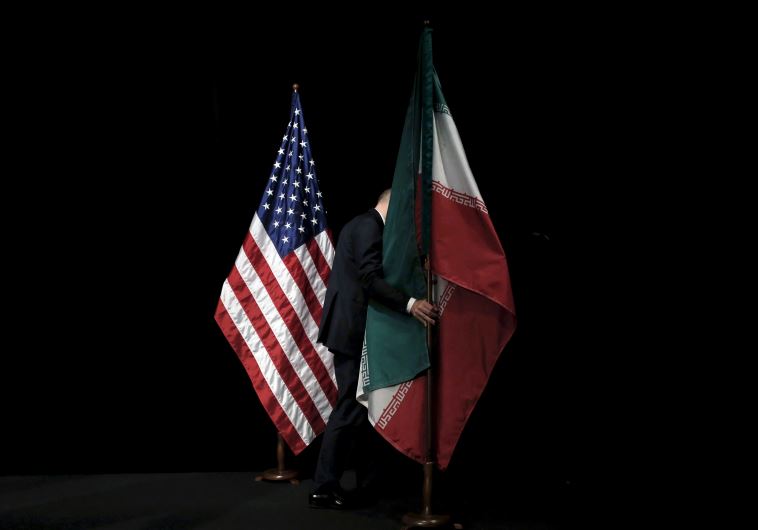 A staff member removes the Iranian flag from the stage during the Iran nuclear talks in Vienna, Austria July 14, 2015 (credit: REUTERS)

The three European powers expressed "disappointment and concern" at Iran's demands, some of which they said were incompatible with the deal's terms or went beyond them.

The 2015 agreement imposed strict limits on Iran's uranium enrichment activities, extending the time it would need to produce enough fissile material for a nuclear bomb, if it chose to, to at least a year from around two to three months. Most experts say that period is now shorter than before the deal.

In exchange for the nuclear restrictions, the deal lifted a panoply of international sanctions against the Islamic Republic.

After more than two years of Iranian adherence to the core curbs, however, then-President Donald Trump pulled the United States out of the deal in 2018, calling it too soft on Tehran, and reimposed painful economic sanctions on Tehran.

Tehran retaliated as of 2019 by breaching many of the deal's limitations on enrichment and other restrictions, and advancing well beyond them. With the deal's nuclear benefits now badly eroded, some Western officials say there is little time left before the foundation of the deal is damaged beyond repair.

Bagheri Kani's uncompromising stance is that since the United States left the deal, it is up to Washington to make the first move by lifting all sanctions imposed on Iran since then, even those unrelated to Tehran's nuclear activities.

Bagheri Kani told Reuters on Monday that the United States and its Western allies also should offer guarantees to Iran that no new sanctions would be imposed on it in the future.

Western negotiators take a return to the original deal as their base line, meaning that if Iran wants more sanctions than those mentioned in the deal to be lifted, it should offer more in terms of nuclear restrictions.

"In order to give a concrete and clear response to our proposals, other parties felt necessary to consult with capitals," Bagheri Kani told reporters after the talks adjourned on Friday.

This week's talks ended as usual with a meeting of the remaining parties to the deal, Iran, Russia, China, Britain, France and Germany. Officials said they will resume mid-week.