The Iran deal, Trump said at a State Department press availability, “only delays their goal of becoming a nuclear state.” 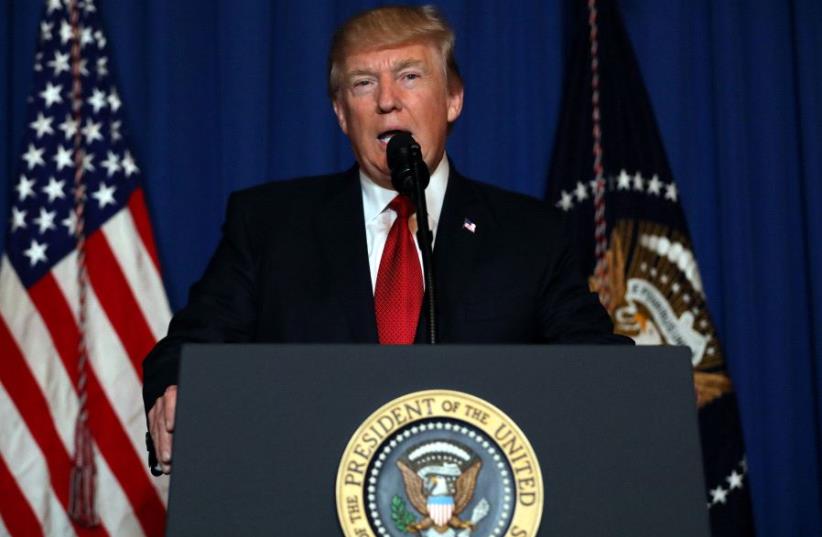 US President Donald Trump delivers an statement about missile strikes on a Syrian airbase, at his Mar-a-Lago estate in West Palm Beach, Florida, US, April 6, 2017.
(photo credit: REUTERS)
Advertisement
WASHINGTON  — Iran is not living up to the “spirit” of the nuclear deal, President Donald Trump said, the latest in a flurry of mixed messages on the deal his administration has relayed in recent days.“As far as Iran is concerned I think they are doing a tremendous disservice to an agreement that was signed,” Trump said Thursday in a joint appearance at the White House with Italian Prime Minister Paolo Gentiloni. “They are not living up to the spirit of the agreement, I can tell you that, and we’re analyzing it very, very carefully and we’ll have something to say about it in the not too distant future.”Trump’s remarks come just a day after Trump’s secretary of state, Rex Tillerson, affirmed in a letter to Congress that Iran was in compliance with the deal. However, in the same letter, Tillerson said the Trump administration would also review the terms of the deal, considering Iran’s leading role in backing terrorism.The deal, reached in 2015 between major powers and Iran, swaps sanctions relief for a rollback of Iran’s nuclear program. It does not address Iran’s backing of terrorism, and the US partners in brokering the deal – including western Europe, Russia, and China – would likely balk at making terrorism an issue after the fact.Tillerson later Thursday said the review would also include Iran’s role in “intensifying multiple conflicts,” including in Syria, Yemen, Iraq and Lebanon, and its threats against Israel, as well as its missile testing. And he said that the Trump administration sees the Iran deal as part of a “failed approach” of previous administrations that helped bring about a nuclear North Korea.The deal, he said at a State Department press availability, “only delays their goal of becoming a nuclear state.”Trump, in his remarks with the Italian prime minister, also slammed the deal.“It was a terrible agreement, it shouldn’t have been signed, it shouldn’t have been negotiated the way it is negotiated,” he said. “I’m all for agreements but that was a bad one, as bad as I’ve ever seen negotiated.”Trump during his presidential campaign relentlessly criticized the deal but stopped short of clearly saying he would scrap it, as most other Republican candidates promised to do. After he was elected, some of his top officials – including his defense secretary, James Mattis – said it would be unwise to scrap the deal.Mattis arrives in Israel on Friday to meet his counterpart there, Defense Minister Avigdor Liberman, and how to contain Iranian influence is likely to be a top discussion item.