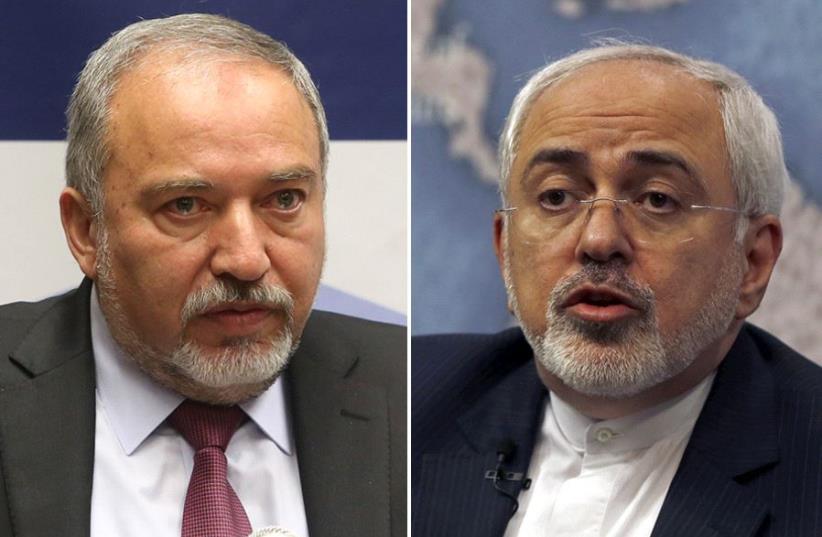 Liberman and Zarif
(photo credit: MARC ISRAEL SELLEM,REUTERS)
Advertisement
Iranian Foreign Minister Mohammed Javad Zarif said Sunday that Iran would never seek to build a nuclear weapon, taking an apparent shot at Israel for being the true nuclear-armed actor endangering the region.Without naming Israel specifically, Zarif said at the Munich Security Conference that there were certain non-members of the Nuclear Nonproliferation Treaty who were spreading accusations about the Iranian nuclear threat."They have the audacity" to talk about the Iranian nuclear threat when they are "the destabilizing force in the region," Zarif said.
Zarif says Iran"s main challenge is "confronting extremist Zionist regime"
"We will never produce nuclear weapons, period," Zarif said. The Iranian foreign minister added that Iran had committed to this in the nuclear deal signed with world powers, the Joint Comprehensive Plan of Action (JCPOA), but has yet to receive the reciprocal fulfilling of the deal from the other side. "The international community still owes us," Zarif stated.In apparent response to US President Donald Trump's comments that he was putting Iran "on notice" over ballistic missile tests last month, Zarif stated that, "We do not respond well to threats."Zarif said that under so-called "crippling sanctions," intended to curb Iran's construction of centrifuges for enriching uranium, Iran had gone from having 200 centrifuges to having some 20,000 centrifuges."We don't respond to threats, we respond to mutual respect," Zarif said.Republican US Senator Lindsay Graham, speaking on a panel at the conference immediately after Zarif, said that not a word the Iranian foreign minister was saying should be believed."They've been trying to build a nuclear weapon," Graham said. "If they say they haven't, they're lying.""You don't build a secret nuclear facility if you don't want to build a nuclear weapon," he added.Graham said that Iran was "a bad actor in the greatest sense of the word when it comes to the region," calling Tehran out specifically for supporting Hezbollah and writing "Death to Israel" on its missiles. "I think it it is now time for the Congress to take Iran on directly in terms of what they’ve done outside the nuclear program," Graham, a member of the Senate Armed Services Committee stated.Graham said he and other Republicans would introduce measures to hold Iran accountable for its actions.Defense Minister Avigdor Liberman was originally supposed to speak on the same panel as Zarif, however the event was changed and he spoke later in the day after the Iranian foreign minister.The defense minister accused Iran of trying to undermine stability in every country in the Middle East.Liberman called the commander of the Iranian Revolutionary Guards' Quds Force, Qassem Suleimani, "the number one terrorist in the world."Liberman said that Israel has not seen more moderate behavior from Iran since the signing of the JCPOA. To the contary, he stated, since the signing of the nuclear deal between Iran and world powers, Israel has seen: a competition organized in Tehran for the best Holocaust denial cartoon, with a prize of $50,000; parades in Tehran featuring ballistic missiles with Hebrew inscriptions, reading 'Israel must be wiped out'; a State Department report finding that Iran is the number one state sponsor of terror in the world; Iranian development of ballistic missiles in violation of UN Security Council Resolution 2231; the persecution of Iran's ethnic and religious minorities; and 600 executions in 2016, often with little or no due process of law.The defense minister said that the Iran nuclear deal was "an attempt to avoid reality," and we were seeing similar results to what the nuclear deal with North Korea has yielded.He called for world powers to enforce a policy of economic pressure, tough policy and following through on UN resolutions, such as in the case of Iran carrying out ballistic missile tests.Saudi Arabia's foreign minister also accused Tehran of being the main sponsor of terrorism in the world and a destabilizing force in the Middle East."Iran remains the single main sponsor of terrorism in the world," Adel al-Jubeir told delegates at the Munich Security Conference. "It’s determined to upend the order in Middle East ... (and) until and unless Iran changes its behavior it would be very difficult to deal with a country like this."Al-Jubeir said Iran was propping up the government of Syrian President Bashar Assad, funding the Houthi separatists in Yemen and violent groups across the region. He said the international community needed to set clear "red lines" to halt Iran's actions.Reuters contributed to this report.