Iranian deputy minister says, "we have approved more than $2 billion of projects in Iran by European companies" in recent weeks. 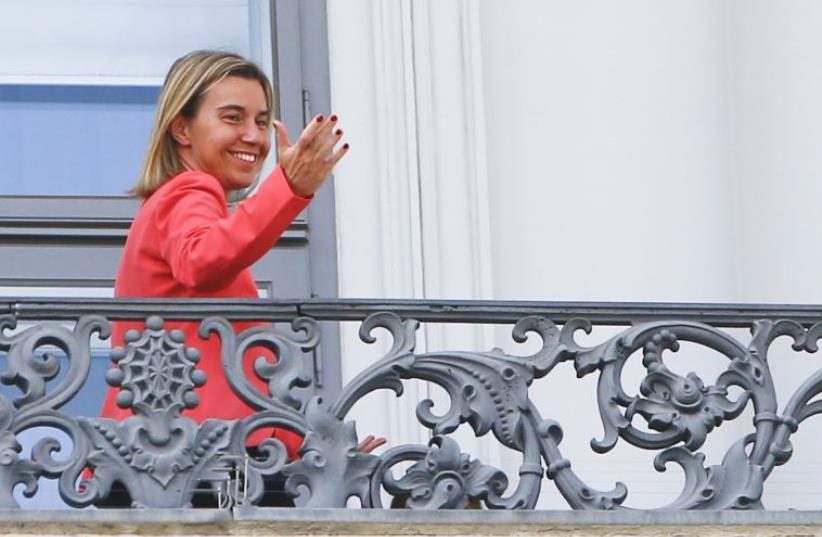 European Union foreign policy chief Federica Mogherini gestures as she stands on the balcony of Palais Coburg, the venue for nuclear talks in Vienna, Austria, July 13, 2015.
(photo credit: REUTERS)
Advertisement
The European Union’s foreign policy chief Federica Mogherini plans to travel to Tehran on Tuesday following the West’s nuclear deal with Iran, after going to Saudi Arabia on her first official visit to the two regional powers.Mogherini’s first stop is to be Saudi Arabia on Monday, where she is looks to meet officials including the country’s new Foreign Minister Adel al-Jubeir, with whom she is expected to discuss regional issues following the July 14 nuclear accord with Iran.She’s then to go on to Iran, where she is meeting Iranian Foreign Minister Mohammed Javad Zarif and other senior officials.The EU formally approved this week the deal it struck with Iran and other world powers, a step towards lifting its economic sanctions against Tehran, which the bloc hopes will send a signal for the US Congress to follow.Mogherini follows on from German Vice Chancellor Sigmar Gabriel’s visit to Iran at the start of this week, the first senior figure from a large Western government to visit the country since the deal.
German vice-chancellor meets Iran"s Rouhani
Gabriel’s three-day business trip to Iran over the weekend sparked a wave of intense criticism from members of his Social Democratic Party and international nongovernmental organizations.Ronald Lauder, president of the World Jewish Congress, accused him of putting business interests before morals and called his approach to Tehran naive.“It is somewhat irritating that Germany’s vice chancellor and economics minister waited only five days before flying to Tehran with a delegation of German business leaders,” he said.Lauder said Gabriel’s offer to function as a bridge builder between Iran and Israel was naive given what he described as ongoing agitation from Tehran against Israel and the United States.“It would have been much better to make new commercial relations with Iran dependent on a change in the regime’s stance toward Israel,” Lauder said.France’s Foreign Minister Laurent Fabius and other European foreign ministers are due to travel there soon.Iran has completed negotiations with some European companies wanting to invest in projects in the country following the nuclear agreement, an Iranian deputy minister said on Thursday.“We are recently witnessing the return of European investors to the country.Some of these negotiations have concluded, and we have approved and granted them the foreign investment licenses and protections,” Mohammad Khazaee, the outgoing Iranian ambassador to the UN, told a conference promoting trade between the EU and Iran.“Even in the past couple of weeks we have approved more than $2 billion of projects in Iran by European companies,” he said, without naming any of the firms or providing further details on the deals.