The statement was made by Ayatollah Mohammad Yazdi, the hardliner who leads the Assembly of Experts, the influential body that will pick Iran's next Supreme Leader. 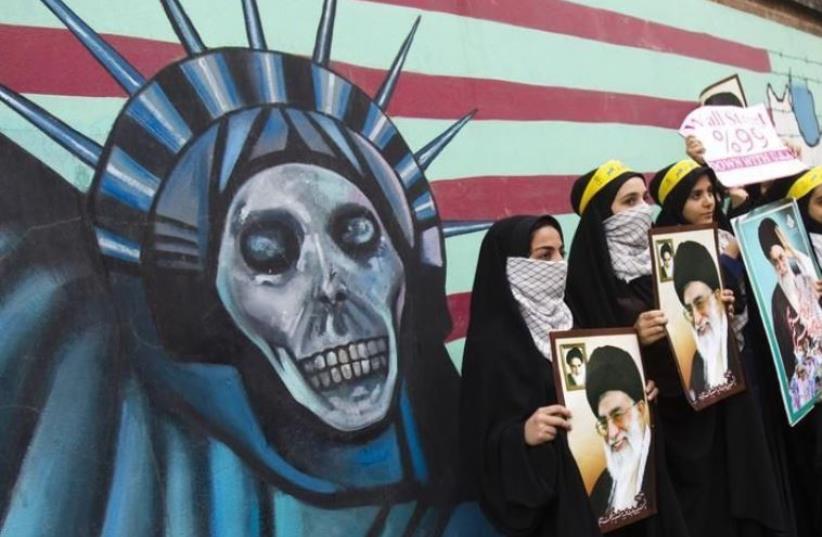 Iranian students hold pictures of Iran's Supreme Leader Ayatollah Ali Khamenei in front of an anti-US mural, painted on the wall of the former US Embassy in Tehran
(photo credit: REUTERS)
Advertisement
Despite the signing of a nuclear deal between Tehran and a group of world powers led by the United States, America remains the Islamic Republic's "number one enemy," the head of Iran's top clerical body said on Tuesday, according to AFP.The statement was made by Ayatollah Mohammad Yazdi, the hardliner who leads the Assembly of Experts, the influential body that will pick Iran's next Supreme Leader.Yazdi told the Assembly of Experts at its annual meeting on Tuesday that Tehran should not "change our foreign policy" of resistance against the US, who he referred to as "our number one enemy, whose crimes are uncountable.""The US and Israel are the source of the situation in the region and (their) goal is to protect the Zionist regime in the Middle East,"  AFP quoted Yazdi as saying.US officials have said repeatedly that they would like relations to change with Iran as a result of the nuclear deal, but that they are not counting on such a development occurring.While the UK has reopened its embassy in Tehran, it did not seem that such a rapprochement was in the cards with the US.Iranian news sites recently published pictures of a person wiping off graffiti that read,"Death to America," from the walls of where the US embassy was formerly located prior to its closure after the Islamic Revolution of 1979.  However, last week, as Britain restored its diplomatic mission in Tehran, Iran's foreign minister said it was too early to talk of reopening the US Embassy.  Iran's Foreign Minister Javad Zarif, when asked if Tehran would now countenance a restoration of the US diplomatic mission, said the United States' "illogical attitude" towards Iran meant the time was not ripe for a similar move with Washington."It seems that there needs to be a change in that kind of attitude and behavior on the part of the US. So the situation is different with the US," he said.