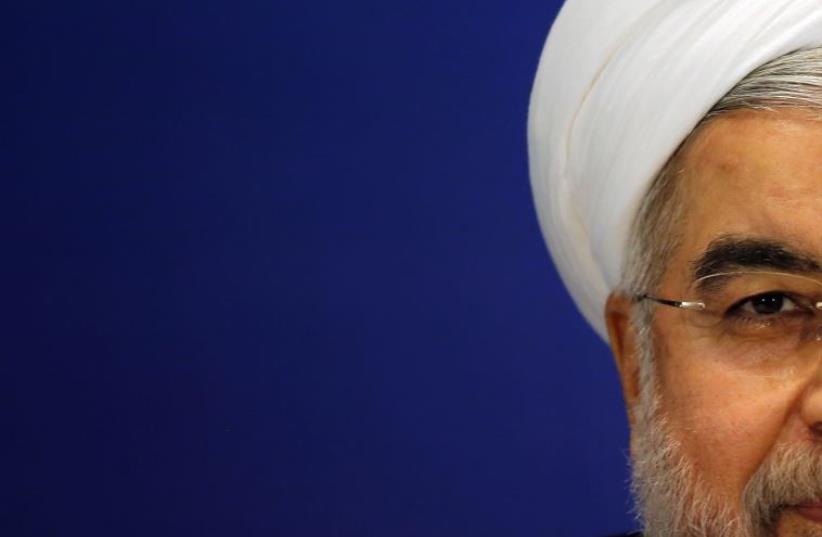 Iran's President Hassan Rouhani attends a news conference in Shanghai
(photo credit: REUTERS)
Advertisement
Iranian President Hassan Rouhani told CNN over the weekend that watching Republican candidates for president vow to nullify the Iran nuclear agreement if they win office was "laughable."The Iranian leader mocked the GOP presidential hopefuls, saying that some of them wouldn't be able to find Iran on a map while Iranians consider their rhetoric "a form of entertainment.""Sometimes when I would have time, some of [the GOP debate] was broadcast live and I would watch it - some of it was quite laughable," Rouhani told CNN. "It was very strange, the things that they spoke of." "Some of them wouldn't even know where Tehran was in relation to Iran. Some of them didn't know where Iran was geographically, not distinguishing that one is the capital of the other.""So what they spoke of was quite far away from the truth. So the people of Iran were looking at it as a form of entertainment, if you will, and found it laughable."Rouhani said that the United States risks losing credibility in the eyes of the international community if it abrogates an agreement negotiated by a previous administration."Can a government become a signatory to an international agreement and then the subsequent government tear it to shreds? This is something that only the likes of Saddam Hussein would do," he said."Saddam Hussein, previous to attacking Iran in 1980, did sign an agreement with Iran and then tore it to shreds himself and then attacked Iran.""So any government that replaces the current government must keep itself committed to the commitments given by the previous administration; otherwise, that government, that entire country, will lose trust internationally and no longer have the type of needed trust to operate in the international arena.""So finally, I think most of these are political slogans at best."