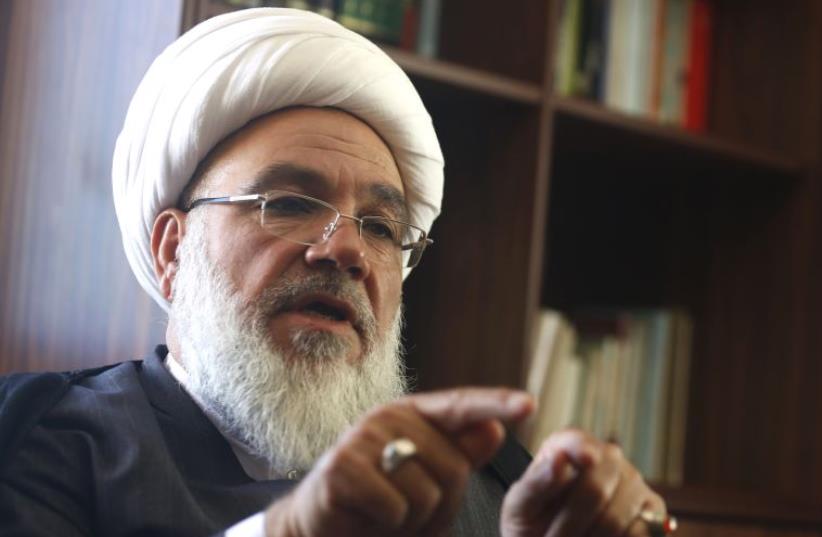 Former secretary general of Hezbollah Sheikh Subhi Tufayli
(photo credit: REUTERS)
Advertisement
Hezbollah's first secretary general, Subhi al-Tufayli, has vehemently attacked the Lebanese terror organization for its participation in the Syrian civil war, claiming that the organization is serving the interests of the Russian conqueror and that its fighting in Syria endangers Shi’ites in Lebanon.In an interview to the Lebanese newspaper al-Mustaqbal on Sunday, al-Tufayli claimed that due to its intervention in the Syrian conflict, Hezbollah will cause much blood to be spilled in Syria and Lebanon. He added that while the organization should withdraw from Syria to prevent the events in the country from escalating into a war against the Shi'ite population in Lebanon, it is actually Iran that decides for Hezbollah and its considerations do not correlate with the interests of the Shi'ites in Lebanon.The former Hezbollah chief heavily criticized the group for its fighting in Syria alongside "the Russian conqueror." According to Tufayli, Hezbollah has lost the legitimacy to fight in Syria and it is now a small faction that serves "the Russian bear" by sacrificing itself in the war and destroying the area.Tufayli, who served as Hezbollah's secretary general from 1989 to 1991, leading the organization's fighting against the Israeli invasion of Lebanon, said that a conqueror is a conqueror – whether Zionist, Russian or American. Hence, "Muslims must defend the Syrian people by fighting the Russian conqueror as they must defend Palestine by fighting the Zionist conqueror.""Is there a new religion we have not heard about that differentiates between conquerors and permits killing Muslim children in Syria?" "I wonder how some of us can give our people and our country to the great powers, believing that Putin is fighting in Syria to exterminate the opposition and that he would leave us alone afterwards."Tufayli's criticism of Hezbollah comes amid a nationwide wave of protests against the organization in Lebanon this week. Saudi Arabia's decision to halt a billion dollar aid package for the Lebanese army was viewed by many central Lebanese politicians as an attempt to exert pressure on the Lebanese political and military establishment to cut its close ties with Hezbollah. Another event that ignited the protest against Hezbollah was a documentary about Hezbollah's Secretary General Hassan Nasrallah, which was broadcast on Al-Arabia TV on Friday. While many Lebanese expected a documentary slandering Nasrallah, they received a documentary praising him. As a result, a campaign aimed at ridiculing Nasrallah was initiated by Lebanese activists on social media with the hashtag: "make fun of Hassan Nasrallah."