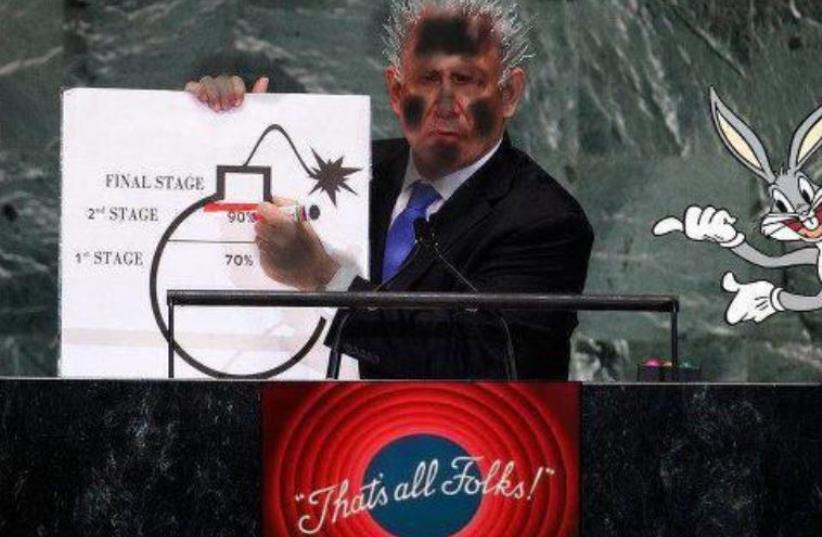 Meme mocking PM Netanyahu in light of the Iranian nuclear deal
(photo credit: TWITTER)
Advertisement
Social media users got creative in expressing their feelings towards the nuclear deal reached between the world powers and Iran on Tuesday. A cartoonist in Iran drew a perspiring Prime Minister Benjamin Netanyahu delivering his now infamous "red line" speech, with the face of the laughing Iranian Foreign Minister Mohammad Javad Zarif in place of the bomb.

An Iranian Twitter user uploaded a doctored photo from the same UN speech. Netanyahu's face is covered in soot and his hair is singed with Bugs Bunny laughing on the side. "That's all folks!" read the image, in classic Loony Toon style.

Israeli's have tried to make light of Netanyahu's continued crusade to stop the deal from receiving congressional approval in the United States. A meme appeared on Facebook showing Netanyahu sitting in a meeting with US President Barak Obama. Netanyahu says to Obama, "You leave me no choice, I will have to use our secret weapon." The second half of the image shows Gal Gadot, Israeli supermodel and actress, who will be playing Wonder Woman in an upcoming movie.

Israel has officially rejected the nuclear agreement hammered out in Vienna between the world powers and Iran. Prime Minister Netanyahu has called the deal "a bad mistake of historic proportions," and warned that “Israel is not bound by this deal with Iran, because Iran continues to seek our destruction. We will always defend ourselves.”