The International Atomic Energy Agency, the United Nations nuclear watchdog, is investigating whether Iran’s nuclear program ever had a military application. 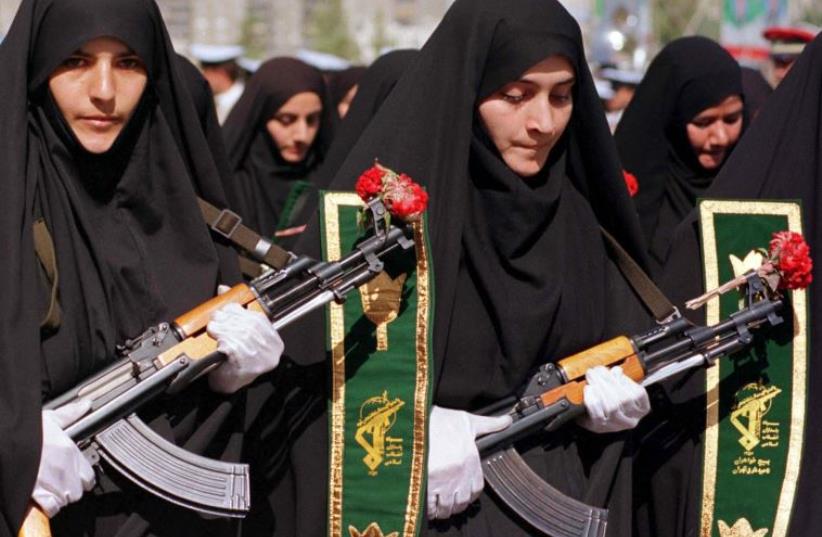 Iranian women mark the 20th anniversary of the start of the Iran-Iraq war during a military parade
(photo credit: REUTERS)
Advertisement
Former Iranian president Akbar Hashemi Rafsanjani’s revelation last week that Iran sought to build nuclear weapons touches on the ongoing debate over whether the fatwa issued by Iran’s leader banning nuclear weapons actually exists.However, the alleged fatwa reportedly issued in 2005 by Supreme Leader Ayatollah Ali Khamenei came after the period when Rafsanjani admits the nuclear option was explored.Nonetheless, such an admission reveals the secretive and slippery nature of the regime. If, according to Khamenei, nuclear weapons were prohibited according to Islam since 2005, then how could they have been allowed a couple of decades earlier according to the same Islamic texts? Iran’s geopolitical situation is not much better than it was, as it still sees the West, Israel and Sunni states as its enemies.The International Atomic Energy Agency, the United Nations nuclear watchdog, is investigating whether Iran’s nuclear program ever had a military application.It is due to issue a report by December 15.Throughout the negotiations, Iran insisted its program had only been for peaceful purposes.“As I have said, when we started the [nuclear] work, we were at war, and we wanted to have such an option for the day our enemies wanted to use nuclear weapons. This was [our] state of mind, but things never become serious,” Rafsanjani, the head of Iran’s Expediency Council and the political rival of Khamenei, said in an interview to the Iranians’ Nuclear Hope website, according to a report by the Middle East Media Research Institute (MEMRI).“However, we took seriously the nonmilitary uses [of the nuclear project], and so we invested money and did a great deal of work. We worked in various areas and also taught a great deal. We dispatched students and invited scientists and many other things of this sort.”Yigal Carmon, president of the Washington-based MEMRI, told The Jerusalem Post on Thursday that Rafsanjani refers to the period of the 1980-1988 Iran-Iraq War and Khamenei’s alleged fatwa was supposedly issued later in 2005. Hence it does not change the fundamentals of the fatwa debate.Thus, Carmon says that the problem remains as it has always been: “Where is the alleged fatwa of 2005? Why can’t anyone in Iran or America show us this fatwa of 2005?” MEMRI stands by its previous reports and its statement to the Post last year, that Khamenei never issued an official fatwa against nuclear weapons, at least not one for which there is any official record.Other experts had told the Post last year that, on the other hand, a fatwa can be oral and does not have to be written down.However, Carmon points out that “the theoretical possibility of issuing an oral fatwa does not serve as a proof that one has been issued.”MEMRI argues that the Iranians are lying about the fatwa and that the Obama administration in endorsing it, commits a grave mistake.“There have been reports that Khamenei issued a fatwa prohibiting nuclear weapons, yet there is no agreed-upon date, place of where it was said, who heard him say it nor the exact phrase used,” Ayelet Savyon, head of the Iran desk at MEMRI, had told the Post last year.Furthermore, she said MEMRI had searched through all the fatwas listed on all the official websites of Khamenei, including his fatwa website, and it was not listed anywhere.Reuters contributed to this report.