Kerry: I do not question for an instant the basis for Netanyahu’s concern. 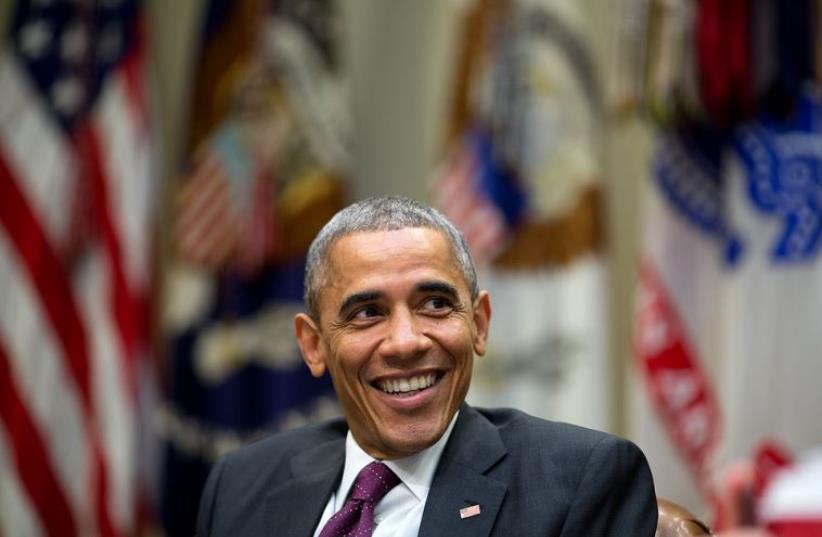 US President Barack Obama laughs during a meeting at the White House
(photo credit: OFFICIAL WHITE HOUSE PHOTO / PETE SOUZA)
Advertisement
WASHINGTON – The Obama administration has secured the support of 34 senators for its nuclear agreement with Iran, ensuring its survival through a vote of disapproval scheduled in Congress later this month.Sen. Barbara Mikulski, a Democrat from Maryland, announced her support for the deal on Wednesday morning.Her decision followed endorsements from two Democratic colleagues, senators Chris Coons of Delaware and Bob Casey Jr. of Pennsylvania, the previous day.US President Barack Obama only needs one-third of one house of Congress to ensure passage of the accord – the minimum necessary to uphold a presidential veto.Congress may still vote and pass a resolution disapproving of the deal when it reconvenes next week.The fight ahead will be over whether that vote of disapproval takes place at all. For the tally to proceed, 60 members of the 100-member Senate will have to agree to proceed with debate. Opponents of the deal are four votes shy of that number, with only 56 members publicly opposed.Should 41 Democrats endorse the agreement, the caucus may choose to filibuster debate and prevent a vote.Congress has until September 17 – the end of its review period of the deal – to hold the vote.Taking no vote for granted, US Secretary of State John Kerry addressed members of agreement he brokered with a speech delivered from Philadelphia on Wednesday.The speech was accompanied by letters penned by Kerry to members of the House and Senate.Iran’s civilian nuclear program is legitimate under international law, and the legitimacy of its uranium enrichment program may have been reinforced by the deal reached with world powers on July 14, he said in the address. But Iran’s efforts to weaponize that program will forever be illegitimate under the deal.The agreement, Kerry claimed, provides the International Atomic Energy Agency with the ability to “go wherever the evidence leads,” including to undeclared facilities such as military installations.Critics had hoped for “anytime, anywhere inspections,” a standard that US negotiators said was unprecedented and unrealistic.Kerry argued, as he has over the past several weeks, that the Joint Comprehensive Plan of Action is permanent, in that Iran is forever bound to keep its nuclear program exclusively peaceful. As a signatory to the Nuclear Non-Proliferation Treaty since 1968, Iran is allowed to retain a peaceful nuclear program and has, since that time, committed not to pursue nuclear weapons.He also said that if Iran wanted to deceive the international community, it would have to construct an entirely secret chain of evidence to cheat. “Iran could never get away with such a deception,” he said.The secretary of state, who negotiated the agreement along with his counterparts from Iran, the United Kingdom, France, Russia, China and Germany over the course of two years, addressed Israel’s concerns at length. US support for Israel “remains rock solid,” he said, noting the “fragility of Israel’s security situation.”“Diplomatically, our support for Israel also remains rock solid as we continue to oppose any effort to delegitimize the Jewish state or to pass biased resolutions against it in international bodies,” he said.“Now, I understand personally there is no way to overstate the concern in Israel about Iran, and about the potential consequences of this agreement – or rejecting this agreement – might have on Israel’s security. The fragility of Israel’s position has been brought home to me on every one of the many trips I have made to that country.“In fact, as secretary of state, I have already traveled to Israel more than a dozen times, spending the equivalent of a full month there – even ordering my plane to land at Ben-Gurion Airport when commercial air traffic had been halted during the last Gaza war, doing so specifically as a sign of support,” he said.Kerry added that since 2009, the US has provided “$20 billion in foreign military financing to Israel – more than half of what we have given to nations worldwide,” vowing to stand with the Jewish state against “biased” resolutions in international fora.In his letter to Congress, Kerry said the Obama administration would support increasing that military financing in a new, 10-year memorandum of understanding between the two nations. He also said Obama was committed to collaborating with Israel on developing tunnel detection and mapping technologies, the Arrow-3 and David’s Sling missile defense systems, as well as other projects to address “conventional and asymmetric threats.”“Over the years, I have walked through Yad Vashem, a living memorial to the six million lost, and I have felt in my bones the unfathomable evil of the Holocaust and the undying reminder never to forget,” Kerry said.“I visited Sderot and witnessed the shredded remains of homemade missiles from Gaza, missiles fired with no other purpose than to sow fear in the hearts of Israeli families.“And as secretary of state, I am fully conscious of the existential nature of the choice Israel must make. I understand the conviction that Israel, even more than any other country, simply cannot afford a mistake in defending its security. And while I respectfully disagree with Prime Minister [Benjamin] Netanyahu about the benefits of the Iran agreement, I do not question for an instant the basis for his concern or that of any Israeli,” Kerry said.