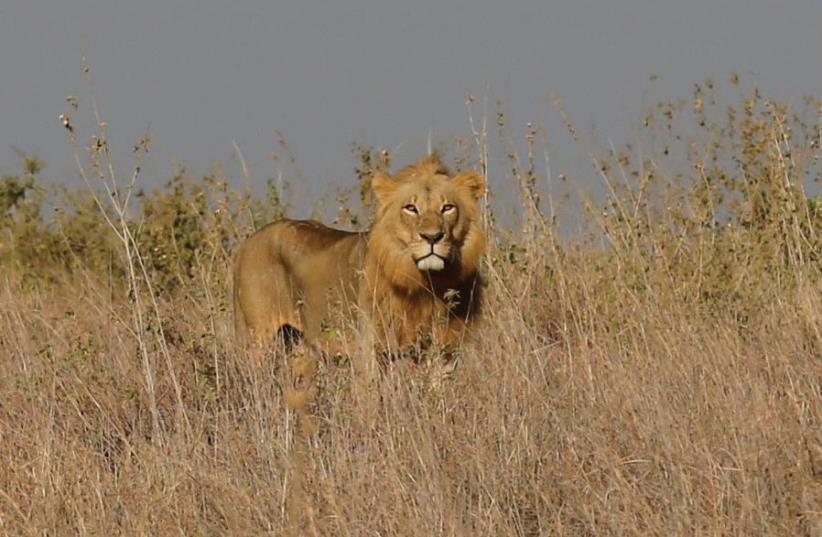 Lion
(photo credit: REUTERS)
Advertisement
Simba and Saeed are not your average lions, having recently been rescued from war-ravaged Mosul, Iraq and Aleppo, Syria, respectively, by the Four Paws organization. After undergoing months of rehabilitation in Jordan at the Al Ma’Wa wildlife center, they finally reached their new home: namely, the Lionsrock sanctuary in South Africa.Simba, believed to be about four years old, was rescued from the Montazah Al-Morour Zoo, whereas Saaed, believed to be two years old, was born in the zoo at the Magic World amusement park.Fiona Miles, Director of Four Paws, South Africa, told The Media Line that saving the lions involved “lengthy negotiations and huge logistics, but eventually last year our international teams were able to make a deal to move them out of Jordan.” She also credited the "many people worldwide who care about animals."On Monday, the lions arrived in Johannesburg after a 33-hour trip that included a flight on a passenger plane and multiple truck rides. Miles spoke to The Media Line from the road with the Four Paws team, transporting Simba and Saeed from the airport to their end-destination, located just outside the South African capital. She explained that the lions will remain permanently within the confines of the animal refuge, where they will be provided with necessary medical care and be able to interact with other kings-of-the-jungle."Each animal [adjusts at] its own pace," Miles explained, "It could take a couple of months of monitoring, but normally they settle down.” Most importantly, she imparted, the lions “will not be under any more stress at Lionsrock,” before nevertheless lamenting the fact that Simba and Saeed "cannot be released into the wild because of the difficult circumstances they have experienced.”But given the 3,000 acres of sprawling nature they will be located on, this should have little impact on their recovery and development.Four Paws has overseen the transfer to South Africa of more than twenty lions over the past decade, with each rescue being driven by a unique set of conditions. "A few years ago," Miles revealed, "lions were confiscated from the Democratic Republic of the Congo because of exploitation in circuses. In the case of Romania and eastern Europe, lions were rescued because of bad zoos and EU regulations.”As regards tending to animals in war zones, it is a daunting task given that zoologists are not allowed work in such environments according to international law. Increasingly, however, "people are more aware about the repercussions and realize that animals are casualties of war and try to help,” Miles stated.Princess Alia Al-Hussein, founder of The Princess Alia Foundation, a Jordan-based NGO dedicated to animal conservation, explained to The Media Line that “Al Ma’wa is a joint project of The Princess Alia Foundation and Four Paws International, established as a solution for wildlife confiscated by authorities from illegal trade and rescues from unsuitable situations."In this respect, Simba and Saeed, specifically, were rescued "in response to requests for help from the zoos in which they were held. In Mosul and Aleppo, many animals had died due to shelling or lack of income.” However, Al-Hussein stressed, “in each case the owners and staff of the zoos had gone out of their way to keep them alive at their own expense and in very difficult and dangerous conditions.”The male lions arrived at Al Ma’wa "on the thin side," after traveling long distances—journeys made lengthier by virtue of the trials associated with obtaining permits for their transport and, not unexpectedly, the inherent obstacles related to moving such large, and potentially injured, animals.“What was noticeable and reassuring," Al-Hussein elaborated, "was that both lions were trusting and not disturbed by human beings. Simba was more shy and took longer to relax and examine his outdoor surroundings. Yet Saeed was a delight from day one,” a reality that inspired the latter's name which means “happy” in Arabic.The goal now is to integrate both lions into the South African sanctuary. "With 78 other rescued lions," Miles concluded, "we are confident Simba and Saeed will find themselves a pride and a joyful ending to their chaotic upbringing.”Daniella P. Cohen is a student intern in The Media Line’s Press and Policy Student ProgramFor more stories from The Media Line, click here.