ISIS leader's ex-wife among those freed in prisoner swap deal

Live TV footage showed the Lebanese captives in vehicles accompanied by masked men armed with assault rifles and waving the Nusra Front flag before they were released to the Red Cross. 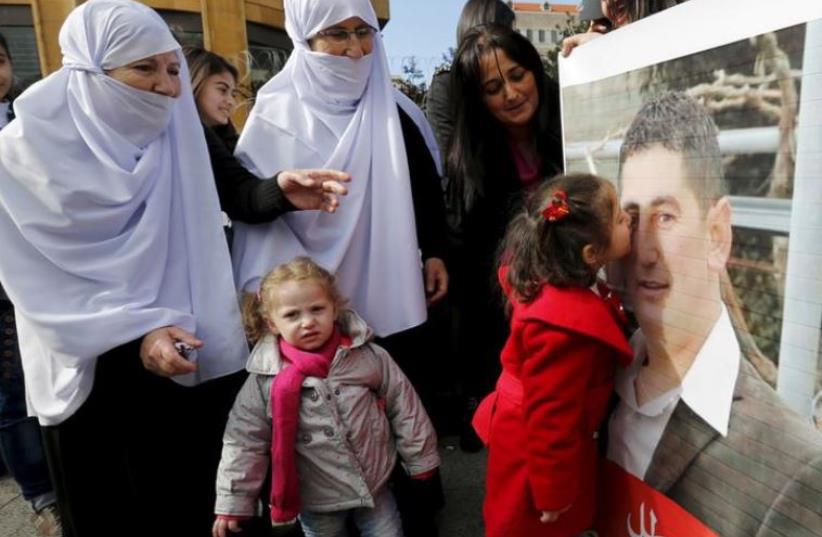 The daughter of Druze policeman Wael Hamzeh Homs, who was captured in Arsal by the al Qaeda-linked Nusra Front, kisses his picture as relatives react in celebration for his release, outside a tent that was erected last year during an open-ended sit-in near the government palace in downtown Beirut, D
(photo credit: REUTERS)
Advertisement
BEIRUT - Al-Qaida's Syrian wing, the Nusra Front, released 16 Lebanese soldiers and policemen held captive since August, 2014 on Tuesday in a Qatari-mediated deal that also secured freedom for a jailed ex-wife of Islamic State leader Abu Bakr al-Baghdadi.The Nusra Front seized the Lebanese during an attack on the border town of Arsal mounted together with the Islamic State jihadist group which is still believed to be holding nine soldiers captured in the incursion.Live TV footage from the border area between Lebanon and Syria showed the Lebanese captives in vehicles accompanied by masked men armed with assault rifles and waving the Nusra Front flag before they were released to the Red Cross.Thirteen Islamists in Lebanese jails, including Saja al-Dulaimi, the ex-wife of Baghdadi, were also released. Dulaimi, fully veiled, was shown in live TV footage from the area with her three children who were with her in prison.Nusra Front fighters were shown kissing and hugging the sons of Dulaimi, who was arrested by the Lebanese authorities a year ago. Speaking to Al Jazeera, she said her wish was to return to Beirut and then to leave to Turkey."We accomplished the entire agreement with Nusra. We received our heroic soldiers and we are on our way back to Beirut," top Lebanese security official Abbas Ibrahim, who oversaw the swap, told Reuters by telephone."This joy not complete until the return of those kidnapped by Daesh. We are ready to negotiate with Daesh if we find someone to negotiate with," he said. Daesh is an Arabic name for Islamic State.The Nusra Front fighters chanted "God is great" as they arrived with the captives in preparation for the swap. One of the captives, interviewed by Al Jazeera, said the group had treated them well.Nusra has killed four of the captives."Praise be to God. The joy cannot be described," another of the captives told Al Jazeera.The exchange began with the Nusra Front releasing the body of one of the Lebanese soldiers it had killed in captivity, Mohamed Hamieh.Qatar has been involved in efforts to mediate the release of the captives for a year or more. A previous effort to secure their release broke down a year ago after one of the captives was killed.