Jihadis online have been encouraging people to donate by citing verses from the Koran praising those that contribute financially to jihad. 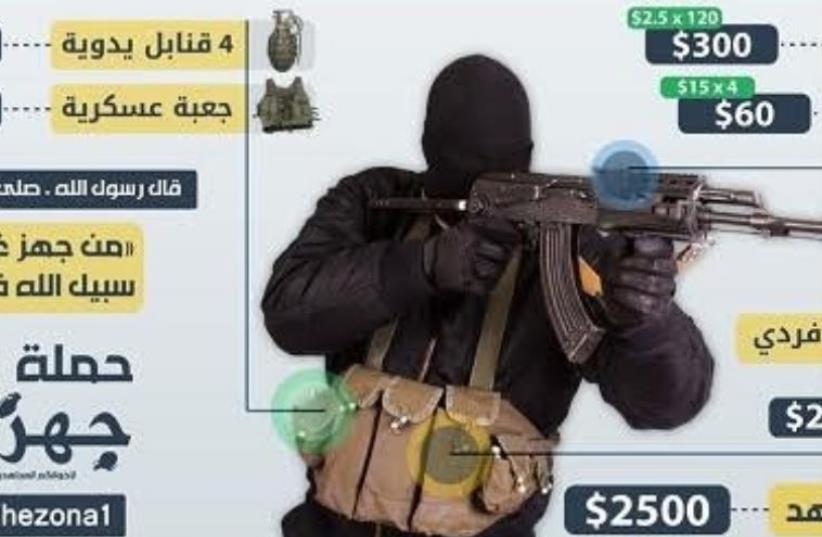 Gaza-based pro-ISIS group's social media fundraising campaign
(photo credit: MEMRI)
Advertisement
Over the past several days, a Gaza-based group that supports Islamic State opened its annual fund-raising campaign on social media such as Twitter, Facebook, YouTube and Telegram.According to a report by the Jihad and Terrorism Threat Monitor of the Middle East Media Research Institute (MEMRI), shared exclusively with The Jerusalem Post, the campaign urges Muslims to donate money to help buy weapons, ammunition and parts to make explosive devices.The fund-raising campaign goes by the name, “Equip Us,” which also has a hashtag on Twitter and been endorsed by the Ibn Taymiyyah Media Center, a prominent pro-Islamic State media group.As part of this fund-raising effort, a number of Twitter accounts have been created and started tweeting articles, videos and posting advertisements, which mention the importance of donating to jihadist groups during Ramadan.These accounts are often shut down, but immediately and persistently reappear, noted the report.Jihadists online have been encouraging people to donate by citing verses from the Koran praising those who contribute financially to jihad.On one video posted on YouTube, a masked man discusses the group’s lack of funds, saying: “By the grace of Allah, the brothers are in an excellent position in terms of knowledge and experience. However, the lack of funding along with the tight budget are hindering us, and the main reason for the launching of the ‘Equip Us’ campaign is the hope that your funding and donations will remove those obstacles and open the horizons of production and development widely for the brothers.”Another video produced by the Ibn Taymiyyah Media Center titled, “A Call for Donation for the Sake of Allah,” features Abdalla al-Ashqar, known as Abu al-Motasib al-Maqdisi, who is one of its leaders, saying jihad is “mandatory” for all Muslims.Acknowledging that it would be impossible for all Muslims to join the jihad physically, he cited Koran verses that call for giving financial support.“Your brothers, the Mujahedin [in the areas] surrounding Bait al-Maqdis [supporters of Jerusalem], are in dire need of your money and donations to turn them into arrows and harpoons [to be used] to attack the Jews, the enemies of Allah, who are the most aggressive enemy to the believers,” he said.“By Allah’s name, the lack of resources and the scarcity of funding are preventing us from [carrying out] dozens of jihadist operations against the enemies of Allah,” added Maqdisi, according to MEMRI.On Twitter, one post called on Muslim women to donate, featuring a women covered in a nikab and carrying a rifle.“This is the terrain of your jihad, so don’t hesitate to support the oppressed monotheists in Palestine and to take the initiative in [making] donations to equip the Mujahedin of Palestine, as they are [fighting] in the front of Bait al-Maqdis,” read the post.And on Facebook, a number of accounts have been promoting the campaign