Is the surrender of a senior ISIS Sinai official a game changer?

After ISIS lost most of its “caliphate” territory in Iraq and Syria, the group has managed to spawn a variety of new chapters and has morphed into new forms in weak and unstable states. 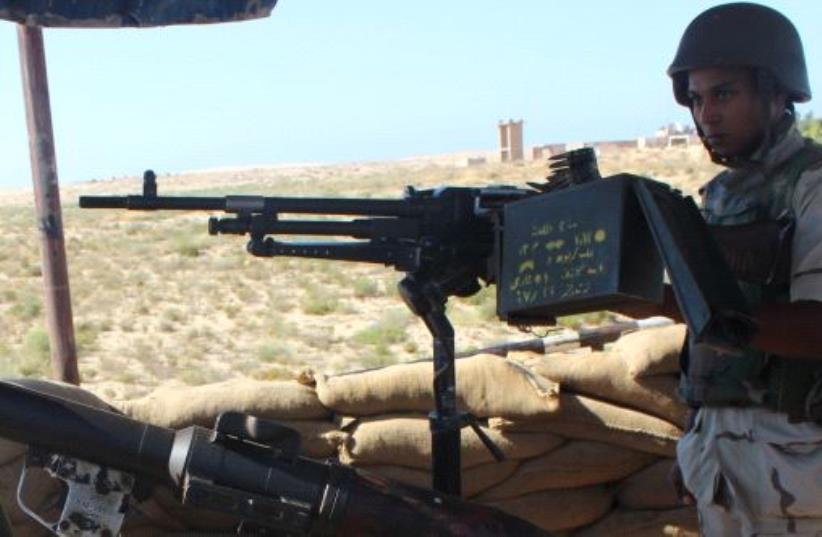 An Egyptian army soldier looks on from his postion at a checkpoint in Al Arish city, the troubled northern part of the Sinai peninsula
(photo credit: REUTERS)
Advertisement

The recent surrender of a key ISIS Sinai operations official to Egypt may signal a paradigm shift in the years-long battle between the sides, according to a Meir Amit Intelligence and Terrorism Information Center report.

The report states that on September 10, Muhammad Sa’ad Kamel al-Sa’idi, aka Abu Hamza al-Qadi (“the judge”) surrendered to a tribal militia cooperating with the Egyptian army after promises that he and his family would not be harmed.

Next, the report says that, “Information that reached the Intelligence and Terrorism Information Center revealed details about al-Qadi and the conditions in the Sinai Province.”

The intelligence center is made up of former senior Israeli intelligence officials and maintains close ties to the current intelligence community, occasionally receiving exclusive material to declassify.

From the report, it emerges that Al-Qadi is “the second or third most important operative in the Province after the Emir (“commander”) and possibly one other person, making him the most senior figure in the Sinai Province to surrender to the Egyptian authorities” to date.

What is even more important is the Meir Amit Center’s contention that “the surrender of al-Qadi… will severely damage the organization, because he will give valuable information and intelligence to the Egyptian authorities and because his surrender will be a blow to the operatives’ morale.”

This is also true because ISIS Sinai currently suffers “from a lack of funds and equipment… from severe hunger… the result of the Egyptian army’s operational successes and cooperation with the tribal militias.”

According to the intelligence center, he surrendered because of these ongoing ISIS Sinai hardships as well as a lack of weapons and ammunition, limiting attacks to the use of “simple weapons, especially IEDs, instead of wide scale attacks and raids. Their morale is low and there is no solution in sight, leading to tension among the operatives.”

In contrast, the report says that the Egyptian army “maintains stability in the northern Sinai Peninsula, [and] invests both funds and efforts in developing the infrastructure. In addition, its counterterrorism activities against the Sinai Province have been successful.”

This success can be measured by the removal of ISIS roadblocks, the killing of its operatives and the recent return of “the civilians kidnapped from the village of Baluza.”

In fact, the report states that recent Egyptian military victories over ISIS Sinai groups led to dozens of operatives surrendering.

Al-Qadi was born in Egypt in 1986 and arrived in the Sinai Peninsula in 2015, after having joined the ranks of ISIS in Syria, it said.

The report says that he was in command of enforcing the Sharia (Islamic religious law) in the Sinai Province, deciding important issues and promoting field operations.

“He authorized the attack on the al-Rauda mosque in the Bir al-Abd region at the end of 2017, in which 300 Sufi Muslims were killed, attacks on truck drivers from the al-Husna cement factory in the middle of the Sinai Peninsula and attacks on other civilians,” the report said.

As Sharia enforcer in the Sinai Province, “he was known as a suspicious and cruel commander, who ordered the execution of operatives in the organization on suspicion of cooperation with the enemy, regularly abused his subordinates, and executed injured operatives to prevent their capture and interrogation by the Egyptian army,” it said.

The report suggests that Abu Hamza will probably be interrogated by the Egyptian army and then moved to an Egyptian jail.

Despite the optimistic trend against Sinai ISIS, the organization has shown a tremendous capacity to spring up in new places with new followers or return to old places where it was thought to have been stamped out.

Close to four years after ISIS lost most of its “caliphate” territory in Iraq and Syria, the group, which has managed to spawn a variety of new chapters and has morphed into new forms in weak and unstable nations across the globe, is far from defunct.