Israeli ambassador to Washington: Confront ISIS in Syria or face consequences in Europe, US

Israel’s Ambassador to the US Ron Dermer links Paris attacks to the terror that Israel has been combating from Palestinian adversaries like Hamas. 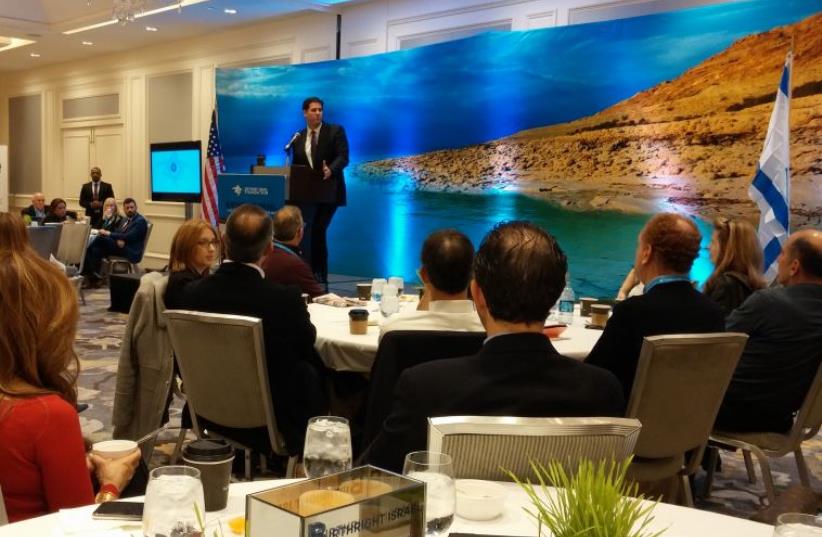 Israel’s Ambassador to the US Ron Dermer
(photo credit: DAVID BRINN)
Advertisement
ATLANTA – If Islamic State terrorism is not confronted in Syria, the spillover into Europe will continue and could reach America, Ambassador to the US Ron Dermer said Monday.Referring to the terrorist attacks in Paris over the weekend, Dermer said, “I’m sure that US President [Barack] Obama and French President [François] Hollande are thinking very clearly what they have to do now, because this is a pretty dramatic attack and it may be the first of many attacks that are coming. There’s no question that the United States, France and its allies have the power to defeat this. I think they just have to have the will and the right strategy to do it.”In his comments to reporters after addressing the fourth annual gathering of the Birthright Israel Foundation in Atlanta, Dermer said that Israel has offered France full cooperation in sharing its information on the terror infrastructure in Syria.“We have very good relations with French intelligence agencies, just as we do with US intelligence agencies. We told France that we’ll give them any help that they need.We have pretty good information about things relating to Syria because it’s a country that borders us – so anything we can do to help France to defend itself against these attacks, we are doing and we will continue to do,” he said.Dermer linked the Paris attacks to the terrorism that Israel has been combating from Palestinian adversaries like Hamas.“What is Israel faces when its citizens are stabbed or its buses blown up or rockets are fired at its cities, is the same thing that they face in Paris,” he said, adding that Islamic State, al-Qaida, Iran and Hamas are all “fired by the same sort of fanaticism.“It’s important for the world to unite, and I hope that in the wake of these heinous and outrageous attacks [in Paris] that you’ll see people support Israel more in its fight against these Islamist militants – because our fight is essentially their fight.”On Sunday, Dermer spoke at Atlanta’s Ebenezer Baptist Church, where Dr. Martin Luther King Jr. once presided. He told the congregants that one of King’s lessons was that nothing justifies terrorism and the deliberate targeting of the innocent.“When it comes to terror against my country, the world often forgets that lesson.When our buses are blown up, our cities are rocketed, and our citizens are stabbed, we hear leaders and diplomats around the world condemn the violence and then in the same breath make excuses for it. You have to understand, they tell us, the reason why these attacks are happening is because of the ‘occupation’ or because there’s no peace process or because the Palestinians don’t have a state.”The Palestinians’ goal for decades has not been to establish a Palestinian state, but to destroy the Jewish state, he concluded, saying that the hope for peace is that young Palestinians will emerge who dream of being their people’s Martin Luther King.