Elite counter-terrorism units advance to liberate Christian towns on Nineveh plain as ISIS suicide bombers try to slow the attack on their regional capital in Iraq. 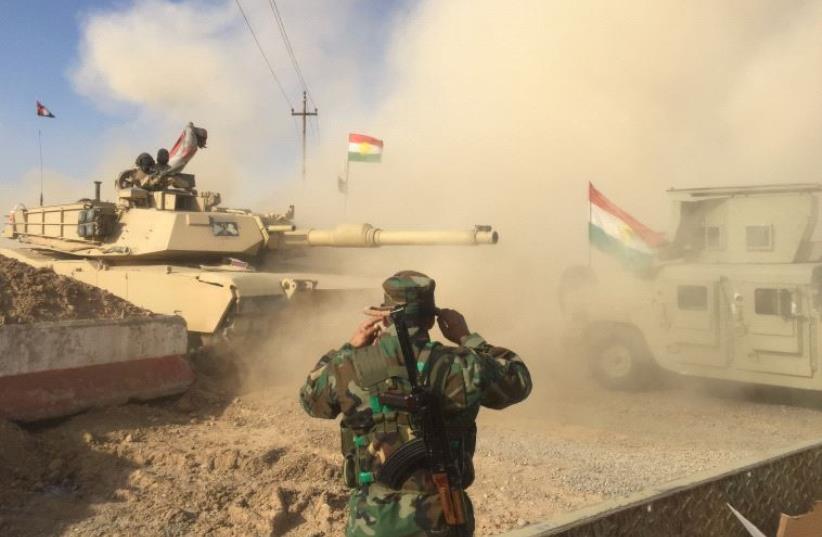 Kurdish Peshmerga forces.
(photo credit: SETH J. FRANTZMAN)
Advertisement
GWER – As Kurdish forces moved to push Islamic State from the town of Bashiqa to the northeast, the Iraqi army is slowly tightening its grip on Mosul’s southern and eastern flank.
Iraqi tank on Gwer frontline with ISIS-lit chemical fire in background.
Clearing the village of Bartella and securing the large, formerly Christian town of Bakhdida will set the stage for the final assault on the center of Islamic State in Iraq.In July 2014, the last remaining Christians in Bakhdida, a town that once housed 50,000, fled the advance of ISIS. They abandoned the ancient community, also known here as Hamdaniyeh and Qaraqosh. The three names are evidence of its long history.Assyrian Christians call it Bakhdida, but the Turks, who occupied northern Iraq for hundreds of years under the Ottoman Empire, called it Qaraqosh.Many local Kurds and Muslims call it Hamdaniyeh.This is the diverse fabric of the Nineveh Plains, which is also a center of competition for the control of Iraq. Whoever wins in Mosul, and how they win, will determine if the Kurdish region, the Sunnis of Mosul and the Shi’ite-led government in Baghdad will coexist or have another round of conflict.In early October, the Iraqi Army was still struggling 40 km. south of Mosul, making slow progress from the city of Qayarrah on the Tigris River. However, an agreement with the autonomous Kurdistan Regional Government has allowed Iraqi forces to deploy alongside the Peshmerga in two sectors on the Nineveh Plains, which bring them within 15 km. of Mosul. The plan was for Kurdish and Iraqi forces to work in concert to clear the approaches to Mosul, which the Iraqi army would then assault. 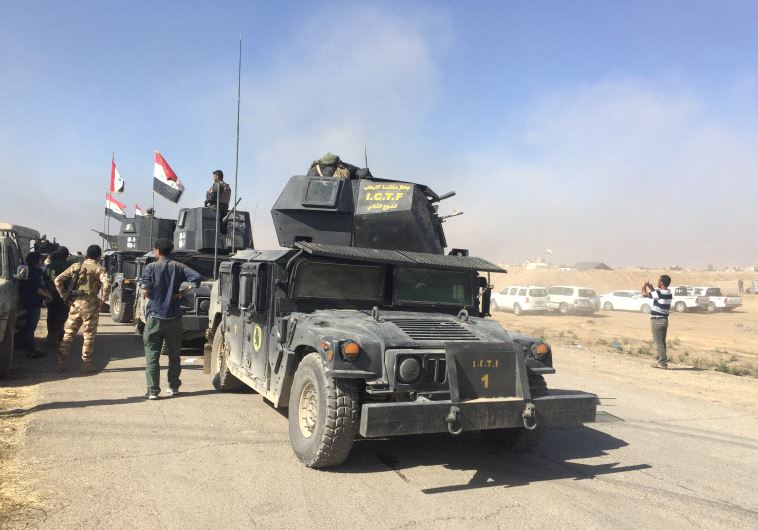 These are sensitive issues, because the Nineveh Plains around Mosul is a diverse area, with Kurdish, Assyrian and other groups who lived here before ISIS arrived. The KRG wants to liberate and protect areas that are Kurdish, while the Iraqi government wants to retake Mosul on its own without Kurdish involvement. Sunni Arabs, who make up the majority in Mosul and the surrounding areas, are often suspicious of the Iraqi central government and the Shi’ite militias who have worked alongside it in the war on ISIS.On the front line at Bartella, the division of forces was clear. Bartlella is a Christian town that lies along a road running from Erbil to Mosul. North of the road, the Peshmerga have advanced and liberated two villages that lie below Mount Zartik. They are building a new front line, with bulldozers pushing up mounds of dirt and men in camouflage constructing small make-shift bunkers.ISIS is still a threat, and the bulldozer driver Salem says they were attacked several nights ago.South of the road, the Iraqi army is pushing forward through Bartella, and also through the large Christian town of Bakhdida. On Saturday, the town was on fire, with four huge plumes of black smoke rising skyward. Even if it is liberated, it may be badly destroyed and take years to rebuild. It’s been a tough battle, said members of the elite Iraqi Counter-Terror Forces (ICTF). A soldier who has been fighting in Bakhdida, named Ahmed al-Buhari, says that they are facing stiff division.The ICTF, often known as the “Golden Division,” are considered the best forces in Iraq’s new army, which was rebuilt after being shattered by ISIS in 2014. They have new American equipment, jet-black painted humvees, and men in black uniforms. “There are still snipers in Bartella and Hamdaniyeh, many suicide attacks. If they stop advancing, ISIS will come back. We had 80 ISIS killed on this front yesterday,” he says.As we speak, an explosion in the distance is so loud it feels like it cracks the air around us. “Suicide bomber,” says one of the soldiers, who are mostly young men who left cities like Basra in Iraq to help reconquer their country from the scourge of ISIS. One man, named Suleiman, left school to go to war. He’s fought in Hit, Fallujah and Ramadi, the toughest battles.The cheer is gone from the faces of these young, hardened soldiers. Their humvee shows signs of battle. A bulletproof window, whose glass seems two inches thick, is partly shattered, and a large shell is wedged into it.There is a kind of cult of wearing images of skulls among the Iraqi units.Some have images from the comic- book hero “Punisher” etched on ammo pouches. Others wear T-shirts with a skull or ski masks with them. 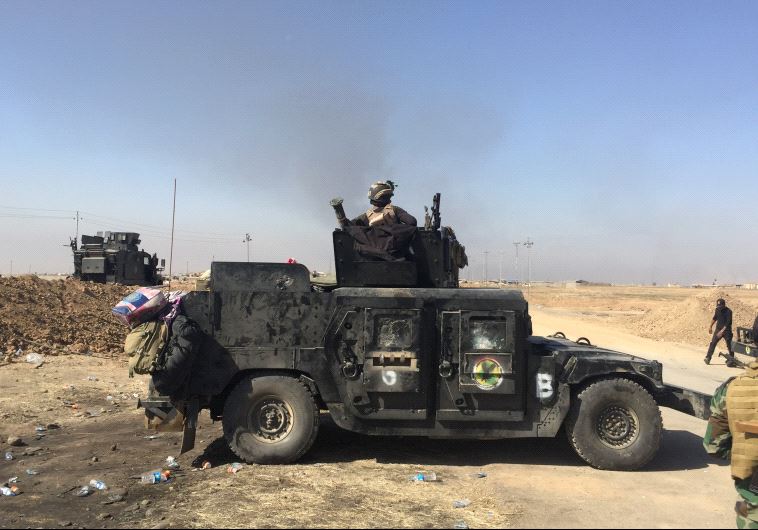 ISIS brought death and destruction, so these men want to show ISIS that they can be just as serious in sending the extremists to their graves. No quarter will be given here.The Iraqi army and Kurdish Peshmerga have a proper relationship, dividing their duties on both sides of the line.We sat with Kurds, who had taken over a house as a forward observation post.Graffiti on a neighboring building says in Kurdish, “So long as I live, I will never abandon my position against ISIS.” As Iraqi units advance, the Kurds hold their sector. They are allies in the war, but not allies deep underneath.Their flags fly side by side on the road, briefly here, but nowhere else. In Kurdish camps, there are no Iraqi flags, and vice versa.ISIS resistance has stiffened in the recent days. When the Mosul offensive began on October 17, it initially went quickly. Villages were taken all along the front line. ISIS melted away.There was even talk of ISIS surrendering the city, or of an uprising among its 1.4 million inhabitants to throw off the shackles of extremism. Reports claimed there were only 5,000 ISIS facing 50,000 Iraqi army and Kurdish forces, and the ISIS fighters seemed weak and pathetic when killed or captured, emaciated, their signature long hair, beards and black uniforms caked with dirt. The once-vaunted ISIS was broken, people said.Compared to ISIS, the Iraqi Army is stocked with American equipment, including modern tanks, legions of humvees, and other ordinance. One Iraqi unit had a massive TOS-1 multiple rocket launcher, a 30-barrel launcher with 200mm rockets, ready to hit positions in Bakhdida if called upon.The men are happy and enthusiastic; they’ve been fighting for two years and feel that victory is within their grasp.ISIS has rallied against the Peshmerga and Iraqi units. It has sent numerous suicide bombers and dug itself in with snipers and mortar positions, and has laced the villages with improvised explosive devices. On Friday, it attacked in Kirkuk, well behind the front lines, occupying buildings and showing that it is still a formidable, dangerous foe.The US is concerned about the pace of the offensive and does not want it to lose momentum. Defense Secretary Ash Carter flew to Baghdad on Saturday, and special presidential envoy for the Global Coalition to Counter ISIS was in Erbil on Friday to show American support for the operation, give assurances that close air support would be effective and prod the Iraqis and Kurds to keep the pressure on the terrorists.The bells of a church in Bartella were rung for the first time in two years, as the ICTF secured the town. This is an important, symbolic victory. Christian fighters from a group called the Nineveh Plains Forces came to Bartella to see their town and participate, although it took time for them to negotiate an entrance through the ICTF lines, arguing and gesticulating to get in. Once Bakhdida and Bartella are fully secure, the Iraqi army will keep pushing into the eastern and southern suburbs of Mosul.