Russia began air strikes in Syria on Sept. 30 and has stepped up attacks in recent weeks. 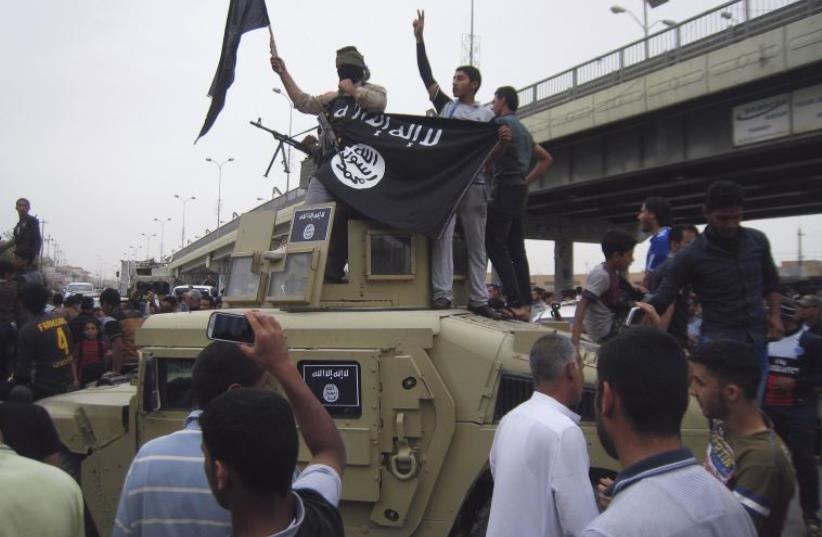 ISIS
(photo credit: ISLAMIC SOCIAL MEDIA)
Advertisement
Ten Syrians linked to Islamic State entered Thailand in October to attack Russian interests, Thai police said in a leaked document citing information from the Russian Federal Security Service.In the document, Special Branch police urged an intensification of security around "target areas that Russian authorities are concerned about", including venues associated with allies that have taken part in attacks on IS in Syria.Russia began air strikes in Syria on Sept. 30 and has stepped up attacks in recent weeks. An IS affiliate claimed responsibility for downing a Russian airliner over Egypt's Sinai peninsula in October, killing all 224 people on board.Thailand's Special Branch, which deals with national security issues, circulated the document to other police units.Marked "Urgent" and dated Nov. 27, the Special Branch police said intelligence from Russia warned that 10 Syrians "related to" IS entered Thailand between Oct. 15 and Oct. 31. The document was circulating on social media on Thursday."The document is real. We received it from Special Branch," said a police officer who handles international crime matters. He declined to be identified because of the sensitivity of the matter."The original communication was by word of mouth between Russian and Thai police. I don't know how the document leaked."The Special Branch said four of the suspects traveled to the seaside city of Pattaya, two to the tourist island of Phuket, two to Bangkok and two to an unknown destination.Police had not received warnings about IS activity from any other foreign intelligence agency, Deputy Police Spokesman Songpol Wattanachai told reporters, adding that police had no information about their whereabouts, identity or possible targets."We're still trying to work out whether they even came in," he said, when asked if they could still be in the country.National Security Council Chief General Thawip Netniyom said security units had been told to be vigilant."We have yet to find any unusual movement," he told reporters. "Everything is safe, rest assured."A press officer at the Russian Embassy in Bangkok could not be reached for comment."TARGET-RICH"The Immigration Bureau had found no irregularities among the 21 Syrians who remain in Thailand of the 231 that entered in October, bureau commissioner Nathathorn Prausoontorn told Reuters on Friday."There is no information linking them to Islamic State," he said.The National Security Council asked the bureau two weeks ago to check on Syrians that had entered since Oct. 1, he said.The UN Office on Drugs and Crime (UNODC) estimates there are 700 to 1,000 foreign Islamist fighters in the region."There is a definite connection between Southeast Asia and Syria," UNODC regional representative Jeremy Douglas said on Friday, adding Thailand would need to work with its neighbors to deal with the threat."It's very plausible that foreign fighters could transit through Bangkok to and from the Middle East," he said.The warning comes three months after a Bangkok bomb attack killed 20 people. Authorities said the blast was in retaliation for a crackdown on human smuggling gangs and said it was not a terrorist attack.A busy tourist destination and hub for businesses and international agencies, Thailand is a "target-rich environment", said Anthony Davis, a Bangkok-based security analyst with IHS-Jane's.Corruption and the presence of transnational criminal groups had helped create "a dangerously permissive environment," he said."Post-Sinai, Russian intelligence is going to be asking 'Where globally are our vulnerabilities?' Thailand is going to be right at the top of their list," said Davis.Thailand's three southernmost provinces bordering Malaysia are home to a large Muslim community, elements of which have waged an insurgency against the Buddhist-dominated Thai state for more than a decade.