According to reports, around 70 militants were killed and dozens more wounded. 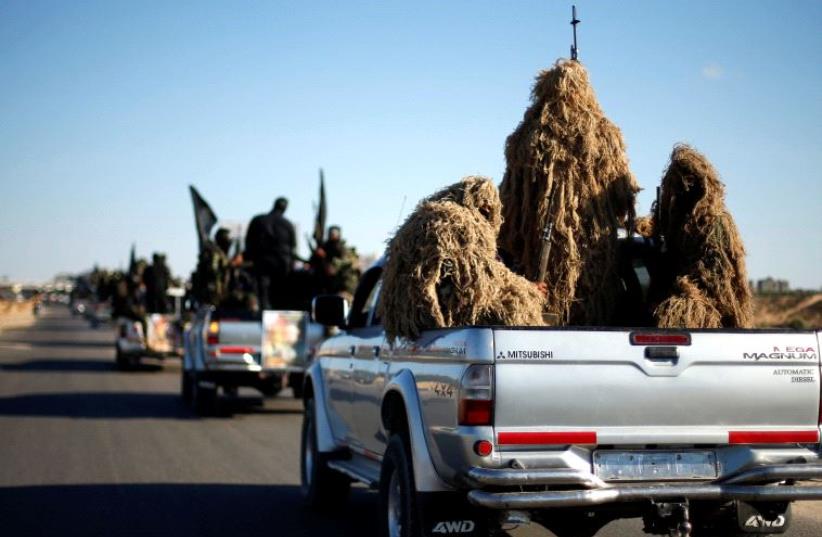 Arab militants parade in Rafah.
(photo credit: REUTERS)
Advertisement
In retaliation for the assassination of a senior military officer, Egypt's air force has allegedly struck a number of Islamic State outposts in the northern Sinai peninsula, early Sunday morning. According to reports, around 70 militants were killed and dozens more wounded. Additionally, air forces attacked positions of the jihadist extremist group 'Ansar Bayt al-Maqdis,' a branch of ISIS-Sinai Province, in the cities of Rafah and Sheikh Zuweid. The strikes destroyed vehicles belonging to the organization which have been used in attacks on Egyptian security forces. Security forces stated that the strikes focused primarily on a village just west of Rafah, near the border with Gaza, where around 70 militants of the Salafist extremist organization were killed. Sky News Arabic reported that Egyptian military forces foiled an attempt to carry out four bombings in northern Sinai, as well as killing one militant attempting to launch an RPG-missile from behind an abandoned house in an area between the villages of Haruba and Qabir-Amir. Top Egyptian officer Maj. Adel Ragaai was gunned down in front of his home north of Cairo just after dawn Saturday in a sign of the increasing conflict between the government and its opponents – both armed and unarmed. The Lewaa Al-Thawra (Revolution Brigade) claimed responsibility for the assassination of Ragaai, head of the Egyptian Ninth Amour Division - the unit charged with destroying the tunnels running between Egypt and the Gaza Strip.Ragaai’s death is the first political assassination of a military figure since former Egyptian president Mohamed Morsi was removed from office by Egypt’s military in 2013.Ragaai oversaw a massive operation that began last year to dig a canal parallel to the Rafah border, flooding the frontier with sea water which seeps into the tunnels, preventing their use.