Islamic State agreed a ceasefire on Sunday with the Lebanese army on one front and the Syrian army and Hezbollah on the other. 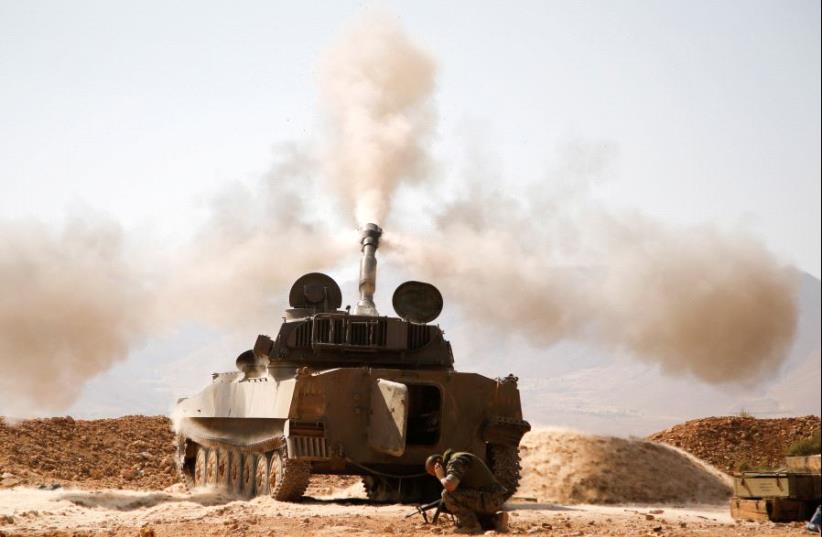 A Hezbollah fighter reacts as he fires a weapon in Western Qalamoun, Syria August 23, 2017.
(photo credit: OMAR SANADIKI/REUTERS)
Advertisement
The Syrian army and Hezbollah prepared on Monday to transport Islamic State fighters from their enclave on the border with Lebanon to eastern Syria after a week-long offensive against the jihadist group.

It will end any militant presence on the border, an important goal for Lebanon and the Shi'ite Hezbollah group, and is the first time Islamic State has publicly agreed to evacuate territory under force.

Islamic State agreed a ceasefire on Sunday with the Lebanese army on one front and the Syrian army and Hezbollah on the other after losing much of its mountainous enclave straddling the border, paving the way for its evacuation.

Hezbollah, a Lebanese group, has been a close ally of Syrian President Bashar al-Assad during Syria's six-year civil war. The Lebanese army said its offensive against Islamic State did not involve coordination with Hezbollah or the Syrian army.

The militants will move out of their positions to a point on the Syrian side of the border where they will board vehicles along with their families to transport them to Albukamal in east Syria, a Lebanese security source said.

Syria's state-run Ikhbariya news channel reported on Monday that the group was burning its machinery and headquarters.

A witness in Syria at the position where buses are gathering to receive the Islamic State fighters said black smoke was visible in the hills and that Syrian army and Hezbollah vehicles were present.

The deal involved Islamic State revealing the fate of nine Lebanese soldiers it captured when it overran the town of Arsal in Lebanon in 2014.

A senior Lebanese security official said late on Sunday the soldiers were almost certainly dead after recovering six bodies and digging for two others in areas previously held by Islamic State.

Earlier this month, two other pockets straddling the border were recaptured by Lebanon and Syria after other militant groups accepted similar evacuation deals.
Advertisement
Hot Opinion