Group delivers message on its daily radio broadcast; one of the attackers reportedly pledged allegiance to ISIS and its leader. 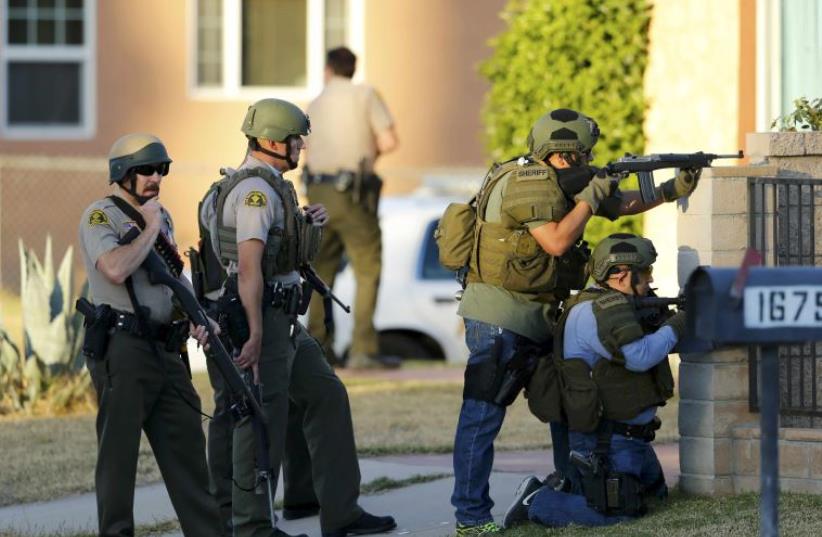 Police officers conduct a manhunt after a mass shooting in San Bernardino, California December 2, 2015
(photo credit: REUTERS)
Advertisement
BEIRUT - Islamic State said in an online radio broadcast on Saturday that two followers of the Islamist militant group had carried out Wednesday's attack on a social services agency party in California in which 14 people were killed and over 20 were wounded."Two followers of Islamic State attacked several days ago a center in San Bernadino in California," the group's daily broadcast al-Bayan said.A news agency which supports Islamic State said on Friday the attackers were followers of the group. US government sources have said there is no evidence the attack was directed by the militant group, or that the organization even knew who the attackers were.One of the attackers in the shooting had pledged allegiance to ISIS and its leader, Abu Bakr al-Baghdadi, on Facebook, according to investigators.According to reports in US media, the female shooter Tashfeen Malik had published the post just before or as the attack was unfolding at the Inland Regional Center in San Bernardino, a facility for people with developmental disabilities, during a holiday party.Quoting a US official familiar with the investigation, CNN reported that Malik's post was made on an account with a different name.The two attackers, Tashfeen Malik and her husband Syed Rizwan Farook, who used to work at the facility, were killed in a shootout with police. Investigators are now trying to gather information on the couple’s motives for carrying out the assault, which remains unclear.Investigators had found on Thursday that Farook had previously been in contact over the phone and online with individuals abroad who were on the FBI and intelligence sources’ terror watch list or who have been previously investigated for terrorist affiliations.US Media reported that Farook was a US citizen and had worked at the Inland Regional Center for some five years. His wife, Malik was a Pakistan national who moved to the United States on a "fiancee visa" before becoming a permanent resident. The couple had a 6-month-old daughter, who they left with her grandmother the day of the attack.According to Reuters, investigators think that Malik’s post pledging allegiance to ISIS is a "game changer" in the investigation.