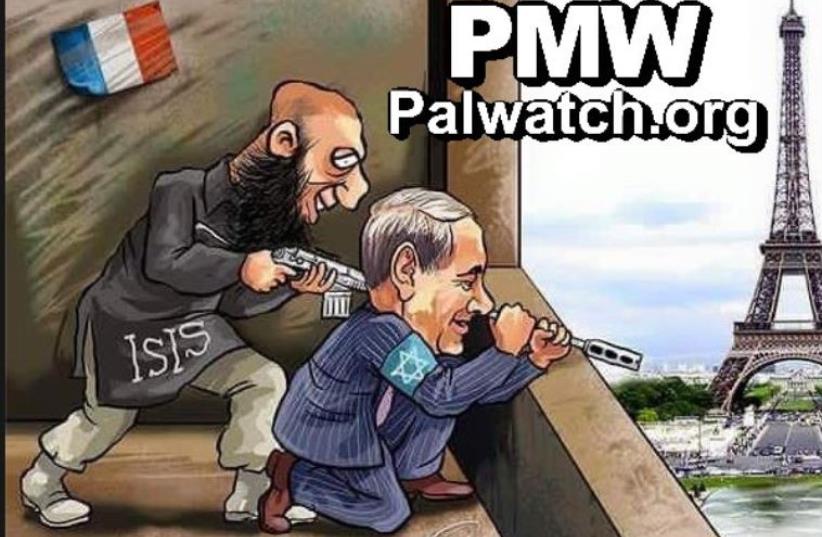 Cartoon from official Facebook page of the Fatah Movement, Nov. 16, 2015
(photo credit: PALESTINIAN SOCIAL MEDIA)
Advertisement
The main Palestinian political party Fatah has published cartoons insinuating that Israel was behind the terror attacks in Paris on Friday that killed 132 people, the NGO Palestinian Media Watch has reported.  ISIS claimed responsibility for the attacks and a man hunt was taking place in Belgium on Monday to apprehend suspects.  The drawings were published on Fatah's official Facebook page, according to PMW. The first cartoon depicts a grinning Prime Minister Benjamin Netanyahu watching Paris from a balcony with a telescope while a grinning ISIS terrorist stands beside him with an assault rifle. A second cartoon shows a matchbox labelled terrorism with two matches: the head of one match depicts the face of an ISIS fighter and the head of the other match shows the head of an orthodox Jew.On Sunday, an op-ed in the official Palestinian Authority daily stated that Israel's Mossad, is behind the attacks in Paris, PMW reported. The writer said the recent approval of EU guidelines for labeling of products from the settlements was the motive for the Israeli attack. "The wise and correct thing is to look for who benefits. In short: They need to search the last place reached by the octopus arms of the Mossad...It is clear that its ‘Mossad’ will burn Beirut and Paris in order to achieve [Israeli Prime Minister Benjamin] Netanyahu’s goals. He, who challenged the master of the White House, hides in his soul enough evil to burn the world,” read the opinion piece in the Al-Hayat Al-Jadida newspaper.