Kerry lands in Moscow to push for Assad’s ouster

The US is skeptical over Moscow’s endgame, and seeks clarity this week, according to one senior State Department official. 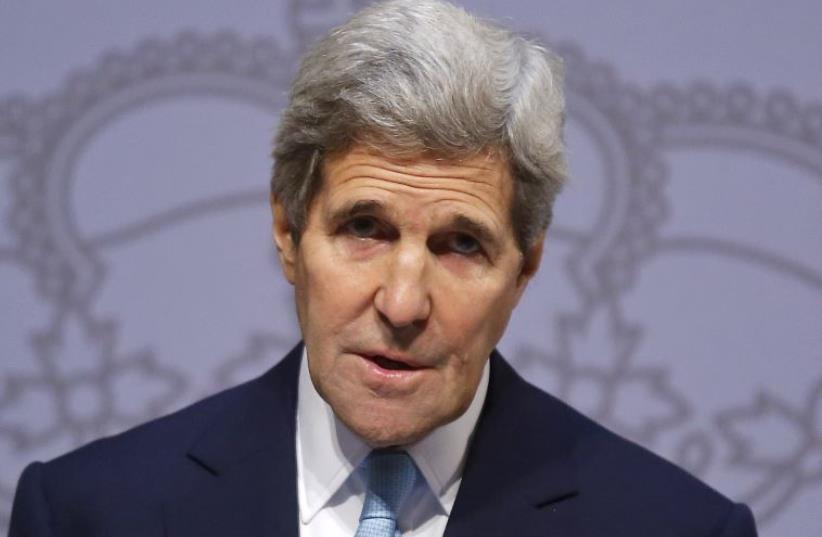 US Secretary of State John Kerry at the Foreign Ministry in Madrid, Spain, October 19, 2015
(photo credit: REUTERS)
Advertisement
WASHINGTON – Secretary of State John Kerry is in Moscow to determine Russia’s interest in securing a political transition in Syria and its leverage over the country’s embattled president, Bashar Assad, toward that end, senior US officials said on Wednesday.The secretary’s visit, during which he has scheduled meetings with Russian Foreign Minister Sergei Lavrov and President Vladimir Putin, comes at a particularly delicate time during talks over Syria, brokered by the United Nations. The UN’s special envoy to the Syrian crisis, Staffan de Mistura, says the first of three rounds of talks in Geneva will end on Thursday – with or without documents proving demonstrable progress in the proximity talks between Assad’s government and the rebel leadership negotiating for his departure.For the first time in years, the two sides have remained at the table – albeit in different rooms, speaking through UN intermediaries – and have acknowledged one another’s existence as legitimate parties to a negotiation over Syria’s future. Yet the Damascus government continues to refuse any discussion over Assad’s fate, seen as central to any conclusion of the war.Russia’s partial pullout of its forces from the Syrian battlefield, where it successfully bolstered Assad over the past year, has been interpreted by the rebels and their benefactors as a positive sign for the negotiations. Moscow says its new focus is on the political process currently under way in Switzerland.But the US is skeptical over Moscow’s endgame, and seeks clarity this week, according to one senior State Department official.“Now that the Russians have lightened their own footprint, now that de Mistura is back at the table with the parties, the question is whether we can get down to brass tacks with the Russians on how you go from here to there in terms of transitioning the government,” the official said. “We have not had very detailed conversations before. Whether the Russians weren’t ready, whether Assad wasn’t ready, I don’t know. But I think the secretary wants to test whether we can make more progress on this trip.”Kerry hopes to nail down Putin on precisely where he stands on talks over Assad’s future, the official said.Russian officials publicly recognize Assad’s legitimacy as president of Syria, despite his presiding over a five-year war that has claimed the lives of roughly 300,000 and displaced half of the country’s population. Privately, Russian officials say that Putin is not wedded to Assad, and would be willing to see him depart so long as Russian interests in the country remain protected.“Obviously – what we’re looking for and what we’ve been looking for, for a long time – is how we are going to transition Syria away from Assad’s leadership. That’s going to be an essential component, particularly for the opposition, and they need to know if the regime is serious about that, if Russia is serious about that,” the senior State Department official continued. “So obviously, any work we’re able to do that clarifies and brings us closer on how a transition could happen will have a positive impact on the talks.”But Moscow this week threatened to act unilaterally against those who are violating the cessation of hostilities in Syria – which was negotiated by the US and Russia last month, and which has largely held – unless it reached a deal with the Obama administration on ways to detect and prevent truce breaches.The Syrian opposition has accused government forces of renewing sieges and stepping up a campaign of barrel bombing across the country.Putin has also said that he could reverse his sizable withdrawal of troops and assets from Syria – verified by the US – within a matter of hours.Reuters contributed to this report.