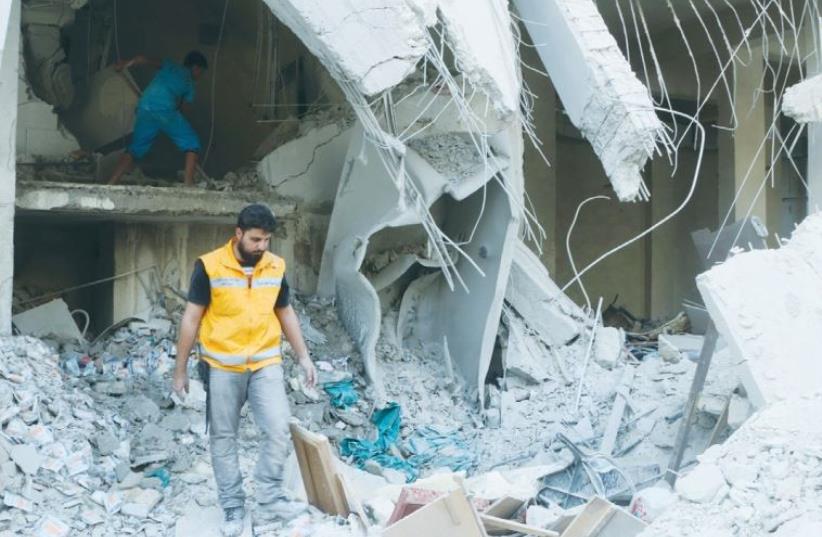 A RED CRESCENT aid worker inspects scattered medical supplies after an air strike on a medical depot in Aleppo on Saturday.
(photo credit: REUTERS)
Advertisement
BELGRADE – US Secretary of State John Kerry flew to Geneva on Sunday in a hastily planned trip meant to salvage shaky peace talks and a crumbling cease-fire in Syria’s civil war.Kerry and his Russian counterpart, Sergei Lavrov, brokered an informal cessation of hostilities in February between Syrian President Bashar Assad and the rebellion against him. But increased weapons shipments to the Assad regime by Russia and Iran, movement of government troops, and a surge in bombing raids by the Syrian and Russian air forces on the strategic city of Aleppo have undermined the truce.A weakening of the truce has led to a crisis in intra-Syrian negotiations in Geneva, brokered by the United Nations, where opposition leadership walked out in protest two weeks ago amid air strikes on hospitals and marketplaces.The Assad regime says that opposition forces have been firing first, and considers all of them terrorists.Kerry plans on meeting with the foreign ministers of Jordan and Saudi Arabia, both of whom back the Syrian opposition and its representation in Geneva, known as the High Negotiations Committee. He will also meet with the UN’s special envoy to the crisis, Staffan de Mistura.De Mistura hopes to draft, through the negotiations, a list of ideas common to both sides as to what a transitional government in Syria will look like.He also aims to get both sides around the same table after conducting “proximity” talks over the past several months.But Kerry will not be meeting with any leader representing Assad, and neither the Russian nor Iranian foreign ministers plan to travel to Geneva.The State Department notes that Kerry has repeatedly called Lavrov, encouraging him to pressure the Assad regime to respect the ceasefire.But Moscow itself is suspected to be orchestrating the assault.The secretary’s urgent visit suggests anxiety over the future of the peace effort – an endeavor that, according to Kerry, may be Syria’s last, best hope for peace through diplomacy.“We’re going to know in a month or two whether or not this transition process is really serious,” Kerry told a congressional panel in February, before the latest round of negotiations began. He questioned whether Syria could remain whole without an end to the war and a successful political transition in the coming months.“If there’s stonewalling, we will know,” he added.He warned that rebel groups considered moderate by the US would be the first to declare the effort a farce.“It may be too late to keep it as a whole Syria if we wait much longer,” Kerry added.“There is a significant discussion taking place now about Plan B if we don’t succeed at the table.”On Saturday a State Department spokesman said the United States is working on “specific initiatives” to reduce the violence in Syria and sees stopping the bloodshed in Aleppo as a top priority. In a statement detailing calls Kerry has made over the past two days with de Mistura and with Riyad Hijab, a negotiator for Syrian opposition groups, State Department spokesman John Kirby said Kerry had made clear the United States wanted Russia to apply pressure to the Assad government to get it to stop “indiscriminate aerial attacks” in Aleppo.“In both calls, the secretary underscored that the initial efforts to reaffirm the cessation of hostilities in Latakia and Eastern Ghouta are not limited to these two areas and that efforts to renew the cessation must and do include Aleppo,” Kirby said.Reuters contributed to this report.