Mus'ab Al-Mosharraf, who blogs for the left-leaning Elaph website, claims that "it is indisputable that there are monkeys of Jewish origin." 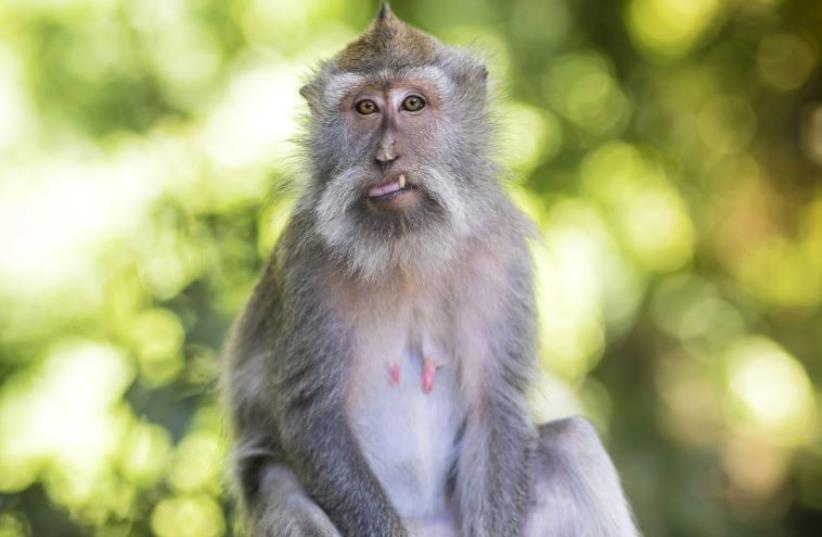 Macaque at Sacred Monkey Forest, Bali, Indonesia
(photo credit: INGIMAGE)
Advertisement
A Sudanese journalist who blogs for a popular liberal Arabic website claims that macaque monkeys are directly descended from Jews, a phenomenon which occurred after Allah punished the Hebrew people for desecrating the Sabbath, The Middle East Media Research Institute (MEMRI) reported Wednesday.Mus'ab Al-Mosharraf, who blogs for the left-leaning Elaph website, claims that "it is indisputable that there are monkeys of Jewish origin; none deny this but those who do not believe in the Koran that Allah...," and points out the similarities in behavior between macaques and Jews."It should be noted that the Jews were subjected to isolation and degradation throughout all of Europe, and particularly by the Nazis in Germany under Adolf Hitler's leadership. Today, macaques have received some attention and interest, because people fear that they could become extinct," Mosharraf says. Mosharraf goes on to site a famous passage in the Koran stating that Jewish people are "the offspring of apes and pigs," an oft used trope designed to denigrate Jewish people. According to MEMRI, the term "offspring of apes and pigs" originates in the Koran in Verse 65 of Surat Al-Baqara, in Verse 60 of Surat Al-Maida, and in Verses 163-169 of Surat Al-A'raf. The parables describe Allah punishing the "Sabbath peoples" for violating his instruction. The publication of Mosharraf's blog comes as a bit of a surprise, according to MEMRI. The blog has never posted content of this nature before, and it has repeatedly condemned the use of "the offspring of apes and pigs" to describe Jews until now.