By JPOST.COM STAFF
JUNE 2, 2012 16:59
Former Egyptian president Mubarak in court 370
(photo credit: REUTERS/Stringer)
Advertisement
CAIRO - Egypt's deposed president Hosni Mubarak was admitted to a prison hospital following a "health crisis" on Saturday after he was sentenced to life in prison, the state's news agency MENA reported."Mubarak has entered to Tora prison hospital after coming out from the aircraft that was transferring him from court to prison," the agency said. Mubarak, who had been in a military hospital during the trial, flew in a helicopter from the court. A state-owned news channel, Nile News, reported that Mubarak suffered a heart attack. The Jerusalem Post could not confirm the veracity of the report. Mubarak has been rumored to have suffered heart attacks on a number of occasions since stepping down from his post amid protests in February 2011.An Egyptian judge convicted Mubarak of complicity in the killings of protesters during the uprising that ended his 30-year rule.It was the first time a deposed Arab leader had faced an ordinary court in person since a wave of uprisings shook the Arab world last year, sweeping away four entrenched rulers. 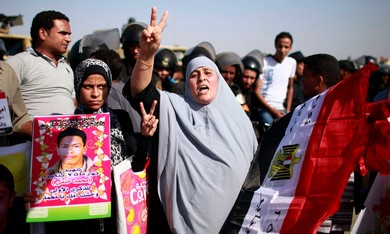 The ruling came at a politically fraught time for Egypt, two weeks before a run-off in its first free presidential election that will pit the Muslim Brotherhood, which was banned under Mubarak, against the deposed autocrat's last prime minister.Mubarak, propped up on a hospital stretcher and wearing dark sunglasses, heard the verdict with a stony expression. He had been wheeled into the cage used in Egyptian courtrooms, while the other defendants stood. 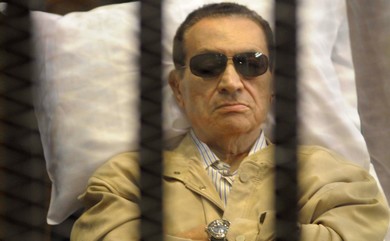 Former Egyptian President Hosni Mubarak sits inside a cage in a courtroom in Cairo (Reuters)Demonstrators outside the court, many of whom had been demanding the death penalty for Mubarak, greeted the verdict with fireworks and cries of "Allahu akbar (God is great)".Soha Saeed, the wife of one of about 850 people killed in the street revolt that toppled Mubarak on Feb. 11, 2011, shouted: "I'm so happy. I'm so happy."Some people inside the court who had wanted a death sentence scuffled with guards, decrying the Mubarak-era judiciary. "The people want the judiciary cleansed!" they chanted.