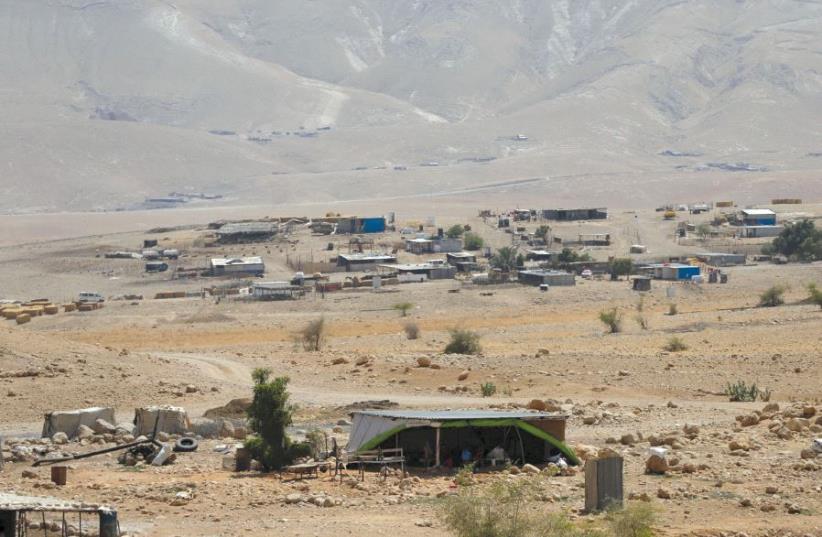 A PALESTINIAN Beduin village near Jericho. Disputes over land in the West Bank often end up decided by a military-run administration.
(photo credit: REUTERS)
Advertisement
The Palestinian Authority has confirmed that it received from Turkey a copy of the Ottoman Empire Archives, including land registries from the territories under its control between 1516 and 1917.The Palestinian Center for Heritage and Islamic Research (METHAQ) said that it received the documents from Turkey in April 2018 and is keeping them for the “purposes of scientific research and documentation of the Palestinian historic narrative.”Khalil al-Rifai, director of the center, told the Palestinian news agency Ma’an that the documents would be used to “confirm Palestinian ownership of lands in light of the [Israeli] settlement offensive and attempts to seize Palestinian properties.”METHAQ, which belongs to the PA’s Religious Affairs Ministry, said the Palestinians received the documents from Turkey in accordance with a “memorandum of understanding” signed between the PA Foreign Ministry and the Turkish authorities.Rifai said the documents are “certified electronic copies, and anyone can view and benefit from them in scientific research of the Palestinian lands.”“These documents are a Palestinian right, and we are a people who are proud of our history,” he said. “We should have obtained a copy of our written history a long tine ago.”The Palestinian center, Rifai said, is in the process of obtaining new and important documents that will be revealed soon. The Ottoman documents include details about land in Jerusalem, the West Bank and Gaza Strip, he explained.“We are proud of this treasure,” Rifai said, adding that his center has received the full backing of the PA leadership.He also said that PA Prime Minister Mohammed Shtayyeh has issued instructions to start preparing the first “Encyclopedia of Palestinian History.”Earlier this week, Israel Hayom reported that attorneys for the PA are already using the archived material in order to undermine Israeli claims to land across Israel, particularly in Jerusalem and the West Bank.According to the Meir Amit Intelligence and Terrorism Information Center (ITIC), the Palestinians consider the documents a tool to prove the ownership of lands Israel is trying to take control of, and to prevent them from being transferred to non-Palestinians.“The documents are also considered a tool that may be used in suits brought against Israel in international courts, proving the ‘Palestinian right’ to the lands,” ITIC said.On March 11, 2018, a ceremony was held in Bethlehem, during which Jamal Abu Tuyur, head of the Waqf office in the city, gave PA Religious Affairs Minister Yusef Edeis files from the Ottoman State Archives dealing with Waqf property in Jerusalem and Bethlehem. The documents, ITIC said, were given to the Palestinians by TIKA (the Turkish Cooperation and Coordination Agency), a Turkish humanitarian aid organization which is a department of the Turkish Prime Minister’s Office.