Israel's president reacted to the news of Tuesday's chemical attack in Syria, saying that Israel as the nation that was founded following the Holocaust was particularly understanding of the crisis. 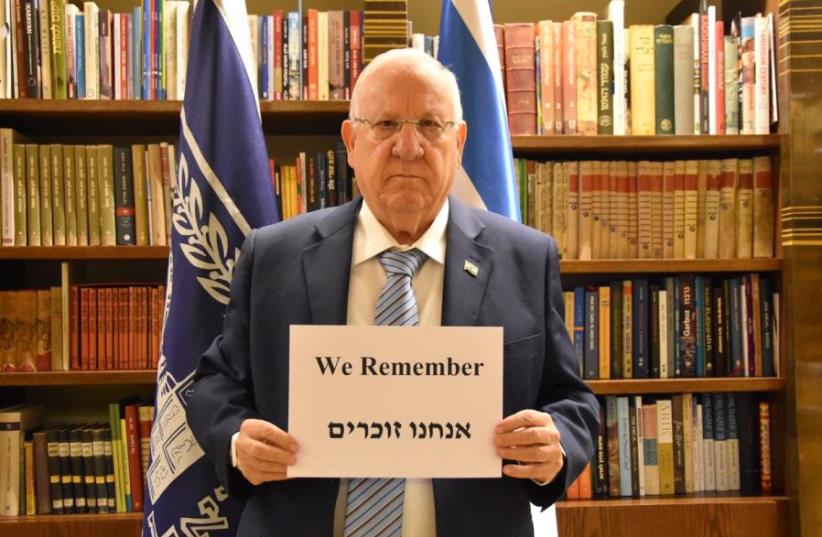 President Reuven Rivlin takes part in a World Jewish Congress photo project for Holocaust Remembrance Day.
(photo credit: WORLD JEWISH CONGRESS)
Advertisement
President Reuven Rivlin expressed Israel's solidarity with the Syrian refugees and victims and stressed that boosted humanitarian efforts were needed to relieve the conflict-worn country from its suffering. Rivlin released an official statement on Tuesday evening after reports worldwide decried an alleged chemical attack on Syrian civilians earlier in the day, which claimed the lives of at least 70 people and injured scores more. "We, sh'erit ha-Pleth ['the surviving remnant,' i.e. Holocaust survivors who immigrated to Israel and went on to be an integral part of the country's founding] which rose from the ground and became a strong and secure nation, will do everything we can in order to continue and aid the survivors of the inferno in Syria," said the president, linking Israel's historical background to its deep commitment to help the victims of the Syrian civil war.
Syrians , victims of Syria civil war, receive medical treatment and help from Israel , Jan. 24, 2017 (credit: REUTERS)
"We know exactly how dangerous silence is and we can't remain mute," he added, referring to the international community's relative silence decades ago in the face of Nazi brutality, which culminated in the death of approximately six millions Jews during World War II. The president said that he expected world leaders to act accordingly, implying that it would be inhumane for them to stand idly by and not learn from past horrors. "I call on the leaders of the international community and among them the heads of world powers, to act immediately, now, in order to stop the deplorable murders taking place in Syria at the hands of the Assad regime and to act urgently to take out all the stockpiles of chemical weapons from Syrian territories."Rivlin called the horrific images that have emerged from the Idlib province "a stain on humanity" and finished by saying that "the whole international community has to recruit to bring an end to this murderous insanity and ensure that such sights will never return, anywhere." In the six years that have lapsed since the Syrian civil war broke out in 2011, Israel has made numerous efforts to extend humanitarian aid to Syrian refugees and victims. Over the years, the IDF has opened field hospitals along the border with Syria where hundreds of injured Syrians were treated. Israel has also accepted Syrian patients into its hospitals, where they were provided with extensive medical treatment on numerous occasions. Israeli groups as well as government organizations have extended aid to Syria as well in the form of medicine and food supplies delivered to Israel's conflicted neighboring country.