Marwan Faouri, secretary-general of the Global Forum for Moderation, said: “The peace caravan can help bridge the hate gap that exists on both sides.” 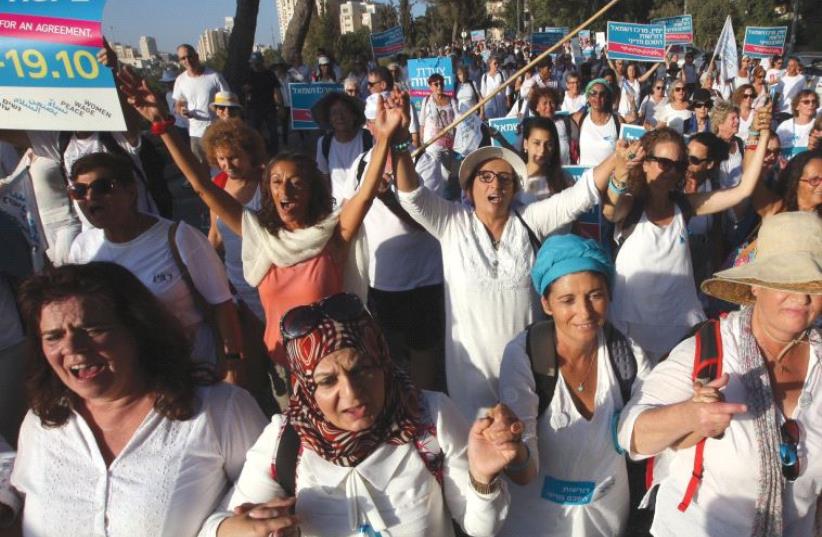 THE MARCH OF HOPE, organized by Women Wage Peace, makes its way to the Prime Minister’s Residence in Jerusalem last week.
(photo credit: MARC ISRAEL SELLEM/THE JERUSALEM POST)
Advertisement
Catholic and Jewish religious leaders expressed support for a call by the secretary-general of the Muslim World League for leaders with no political affiliation to travel to Jerusalem in a “peace caravan.”Dr. Mohammed bin Abdul Karim Al-Issa’s call was made on Thursday at the opening of a conference in New York on cultural rapprochement between the US and Muslim world.“This convoy should represent all three religions who will visit the holy places in Jerusalem,” he told some 400 Jewish, Christian and Muslim leaders.Marwan Faouri, secretary-general of the Global Forum for Moderation said: “The peace caravan can help bridge the hate gap that exists on both sides.”Rabbi Joseph Potasnik, executive president of the New York Board of Rabbis, said that the Palestinian-Israeli conflict can’t be ignored or camouflaged.“Peace can’t be reached by more fighting. Palestinians are not going anywhere, and Israelis are not going anywhere, and therefore a way has to be found to allow these two peoples to live together.”Michael Coppotelli, associate superintendent of schools in the Archdiocese of New York, said: “We need to find a way to train children so that they can embrace a caravan of peace. This can only be done through education.”Zainab Al-Suwaij, executive director of the American Islamic Congress, said that minority rights in the Muslim world must be respected; however, work is needed to fight violent extremism.
“To build bridges we can stop hatred and empower our nations and stop violence and extremism,” she said.Ali Rashid Al-Nuaimi, chairman of the newly established Abu Dhabi Department of Education and Knowledge, called on participants to look to the future and not be enslaved to the past.Al-Nuaimi said it is unacceptable to focus on dialogue when work is needed on programs. “What we expect from this meeting is to launch ideas and programs for everyone. We need to have solid accomplishments that prove that we believe in accepting the other.”Additionally, Al-Nuaimi placed heavy emphasis on the need to promote the role of women and youth. “If we are honest with ourselves we need to confess that for every step forward, for women, we take many backwards.”He hopes future meetings will encourage youth from different backgrounds to have an open dialogue.
©2018 the Arab News (Jeddah, Saudi Arabia) - www.arabnews.com -Distributed by Tribune Content Agency, LLC