The significance that Hamas is seeking Iran’s help for an issue in Iraq is more symbolic of Hamas’ relations with Tehran and Iran’s influence in Iraq - this is of greater concern to Israel. 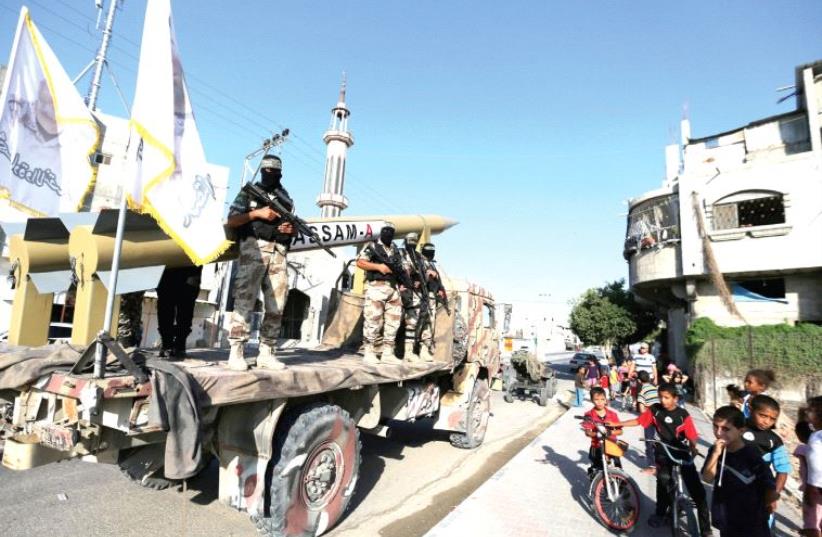 Hamas gunmen display Qassam rockets
(photo credit: REUTERS)
Advertisement
Hamas has turned to its friends in Tehran to seek mediation with Baghdad in the case of Taha Muhammad al-Jabouri, an expert in rocket fuels. The incident shows the increasing desperation of Hamas and its links to Iran.The Philippine National Police detained the Iraqi citizen in Pampanga in the Central Luzon region on January 21, according to the Rappler website, which follows the Philippines and security issues.Jabouri, who was born in 1954, studied at the University of Baghdad before he began working in military facilities under Saddam Hussein, helping to increase the capabilities of Iraq’s missile systems.He allegedly went to work for Hamas and conducted research and development of missile technology, according to the Palestinian media website Amad. Jabouri overstayed his visa in the Philippines and was detained along with other Arabic speaking men. Manila – which is fighting a war against Islamist groups in the south and has been targeted by al-Qaeda in the past – checked whether he might be in touch with other terrorist groups.Under interrogation in the Philippines, Jabouri said he acted as a consultant for Hamas and lived in Damascus before moving to Istanbul in 2012.He also claimed to be working as a consultant for a Chinese business group and arrived in the Philippines in August 2017.Apparently Iraq had alerted Manila to his presence. According to the Iraqi News website, Jabouri was sent back to Turkey and was then deported to Baghdad, where Iraqi authorities arrested him. The Iraqi report claimed he is wanted by Israel.Hamas was quoted by Al-Akhbar Media in Lebanon as saying it would mediate for his release.The report claimed Jabouri had become involved with Hamas eight years ago but implied he was not currently doing work for the organization. Nevertheless, Hamas sought Iran’s help “to communicate with the Islamic Republic of Iran, because of the recent good relationship with Iraq, to mediate for his release.”The report comes in the wake of a speech by IDF Military Intelligence Directorate chief Maj.-Gen. Herzi Halevi, at a Ynet conference on March 25.Halevi said Hamas was reaching a low point and facing a civil and structural crisis and was “running into the arms of Iran,” according to a report of his speech published by the Jerusalem Center for Public Affairs.That Hamas is seeking to aid its former engineer does not necessarily indicate Jabouri is still a key to its rocket program.His expertise dates back to the 1990s, when he was helping Saddam fuel his Scud missiles.Scott Ritter, the UN weapons inspector in Iraq during the 1990s, met Jabouri and described him in a 2006 book.Even in the 1990s, Ritter wrote that Jabouri’s expertise for longrange missiles was lacking. The seeking of Iran’s help for an issue in Iraq is more symbolic of Hamas’s relations with Tehran and Iran’s influence in Iraq. This is of a greater concern to Israel.