Russian deputy FM to ‘Post’: Hezbollah will leave Syria when conflict is over

Oleg Syromolotov made this statement in an exclusive interview with the 'Post,' and also said that he understood Israel's concern that Hezbollah will remain in Syria and pose a long-lasting threat. 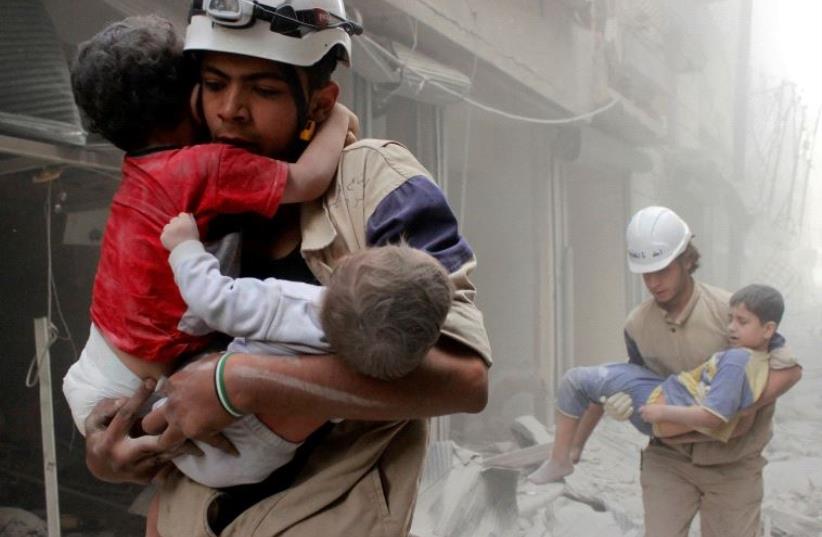 Members of the Civil Defence rescue children after what activists said was an air strike by forces loyal to Syria's President Bashar al-Assad in al-Shaar neighbourhood of Aleppo, Syria June 2, 2014
(photo credit: REUTERS)
Advertisement
The Syrian government invited Iran and Hezbollah to aid it in the Syrian civil war, and when the war is over they, along with all armed groups, “will leave,” Russian Federation Deputy Minister of Foreign Affairs Oleg Syromolotov told The Jerusalem Post on Monday.“I understand the fears of Israel relating to Hezbollah and the Revolutionary Guards in Syria, and you of course fear that they will stay in Syria after the war,” he said.He noted Israel’s concern over what will become of the involvement of Hezbollah and the Iranian Revolutionary Guard Corps in the Syrian conflict.“For us, Hezbollah is part of the politics of Lebanon, and an important part of the population of Lebanon supports them and they are a part of the parliament,” Syromolotov said. The Iranian Revolutionary Guard Corps is also part of the military structure of Iran.“For that reason, there is no way to put them on the list of international terrorists,” he said.In November, Prime Minister Benjamin Netanyahu told Russian counterpart Dimitry Medvedev that Iran must be prevented from establishing bases in Syria, and told the Interfax news agency that Syria must be prevented from being used by Iran or Hezbollah to attack Israel or to transfer “sophisticated weapons to Hezbollah.”For Russia, the Syrian conflict is seen as one among the legally established government of Bashar Assad and his opponents and terrorists.“Russia claims that Syria’s conflict cannot be solved through military means only,” said Syromolotov.
Hezbollah captives in Syria attack the organization"s involvement in the Syrian civil war
“One of the central issues is to separate the opposition from the terrorists, and in the last year we have tried with the Americans to come to an agreement on this and the Americans did not manage to make this distinction between the opposition and terrorists and it didn’t happen.”However, the deputy minister said, there are now high hopes coming from the Astana talks on Syria taking place in Kazakhstan. A cease-fire with the opposition has held, despite several violations.
Oleg Syromolotov
Israel’s views on Hezbollah do not dovetail with Russia’s, in the same way that not every terrorist group that threatens Russia is considered a terrorist group by Israel. Syromolotov pointed to the example of the Caucuses Emirates which carried out attacks on schools and in Moscow, which Russia viewed as a threat but which Israel or other countries did not designate as terrorism.Syromolotov is in Israel for a multi-day visit that will include high-level meetings at the Foreign Ministry. He is responsible for counter-terrorism efforts at his ministry and is discussing ways Israel and Russia can cooperate in the global fight against terrorism.A former head of counter-intelligence for the Federal Security Service with decades of experience, Syromolotov was appointed to his current post in 2015.“Both the Russian Federation and Israel have experience with the fight against terrorism and that is based on hard work and human resources and [terrorist] events that happened before and continue to happen,” he said.Russia has faced terrorism in the north Caucuses region since the 1990s. However, like Israel, its own experience fighting terrorism now integrates a wider global perspective.“There are a number of ways Israel and Russia can work together,” he said. “One thing relates to sharing information, and there is cooperation in international forums such as the UN, and that is one of the major and important parts of the work we do.”For Russia, one of the main fronts against terrorism today is in international forums such as the United Nations and trying to encourage countries to increase cooperation and sharing information.“The important thing in the battle against foreign terrorism is for the international community to do three things.""First, it is necessary to set up a joint international database listing foreign terrorists and militants. Second, it is necessary to set up a database and a system for monitoring their movements. And, third, it is necessary to simplify the extradition of foreign terrorists and militants from one state to another, because the extradition procedure is rather lengthy.”Syromolotov explained that there is a threat emerging from the swath of territory stretching from central Africa to central and Southeast Asia via the Middle East. This belt of instability, including states that have fallen into chaos such as Libya, is a generator of terrorists and a magnet for them, he said. 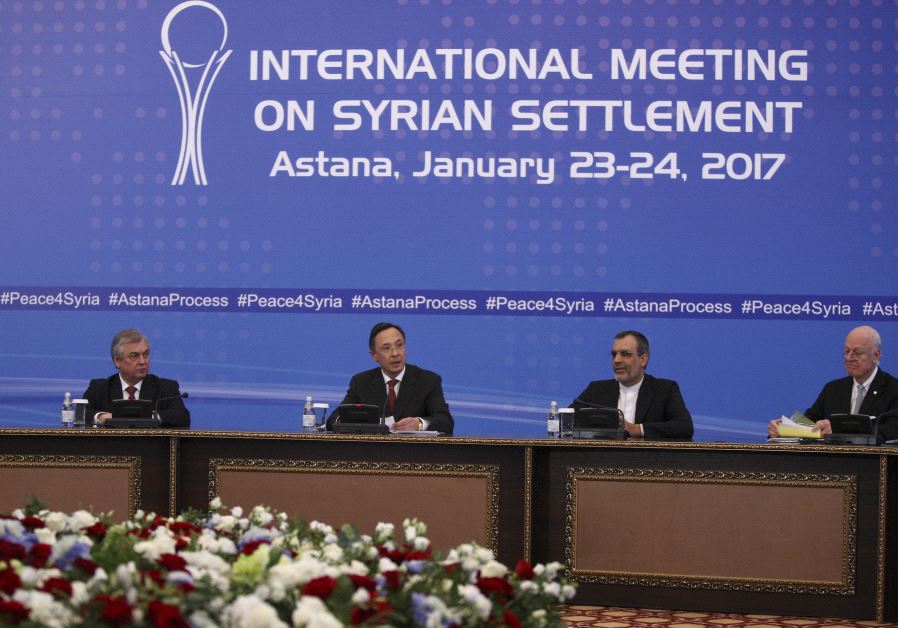 Kazakh Foreign Minister Kairat Abdrakhmanov (C) and U.N. special envoy for Syria Staffan de Mistura (R) attend a news conference following Syria peace talks in Astana, Kazakhstan
In an interview with Interfax in October last year, Syromolotov said that it is important to keep track of registering immigrants entering Europe and checking their passports.“European authorities are currently unable to locate 350,000 refugees. Where are they? How can this be possible? Do you think there are no terrorists among them? Of course there are,” he told Interfax.Yacov Livne, director of the Foreign Ministry’s Eurasia department, said Syromolotov’s visit is part of Israel’s “good relations with Russia,” one that involves daily contact on numerous levels of government, including terrorism and counter-terrorism.“We have a good understanding between Russia and Israel on a variety of issues and we hope the visit will contribute to enhancing this understanding and contacts,” Livne said.One issue coming up may relate to a meeting in Moscow between Netanyahu and Palestinian Authority President Mahmoud Abbas. In the fall of 2016, the two were invited to meet in Moscow, but the talks were postponed. Syromolotov stressed that “if the Israel-Palestinian conflict would end, then the terrorist organizations in the Middle East would not multiply.”Russia has supported a Palestinian unity government and continues to encourage talks between Abbas and Netanyahu.As with Hezbollah, Moscow does not see Hamas as a terrorist organization, but rather as “part of the Palestinian politics,” Syromolotov said.Russia sees cooperation among Egypt, Jordan and Israel as important for the region and in international forums, he said. “Egypt, for instance, is heading the counter-terrorism committee at the UN Security Council.”The downing of Metrojet Flight 9268 in 2015 in which 219 Russians were killed in Sinai led Russia to work closely with Egypt in confronting terrorism in the peninsula, such as the group Vilayet Sinai.Russia also has hopes for the new US administration in Washington, Syromolotov said. “During the first conversation between President Vladimir Putin and President Donald Trump, the issue of terrorism came up and they actively discussed this issue, and of course we know that in this situation, that it is a new government and it will want cooperation against terrorism.We think that the position of Russia and US are most important in fighting terrorism, and I think that there will be positive changes.”