"This is not a friendly port call. In two weeks, we will see a crescendo of air attacks on Aleppo as part of Russia's strategy to declare victory there," a NATO diplomat said. 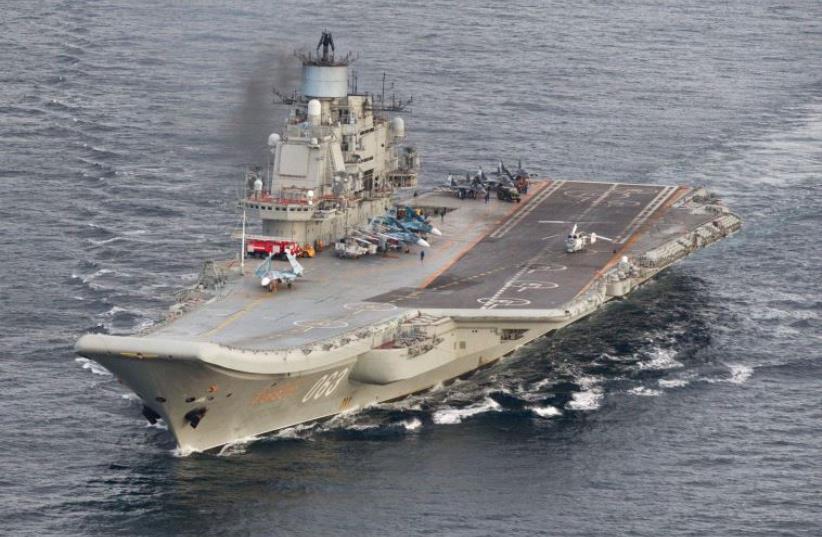 Russian aircraft carrier Admiral Kuznetsov in international waters off the coast of Northern Norway.
(photo credit: NORSK TELEGRAMBYRA AS/REUTERS)
Advertisement
Russian warships off the coast of Norway are carrying fighter bombers that are likely to reinforce a final assault on the besieged Syrian city of Aleppo in two weeks, a senior NATO diplomat said on Wednesday, citing Western intelligence.The fleet passed by the Norwegian city of Bergen on Wednesday, the diplomat said, while Russian media has said it will move through the English Channel, past Gibraltar and into the Mediterranean Sea to the Syrian coast."They are deploying all of the Northern fleet and much of the Baltic fleet in the largest surface deployment since the end of the Cold War," the diplomat said on condition of anonymity."This is not a friendly port call. In two weeks, we will see a crescendo of air attacks on Aleppo as part of Russia's strategy to declare victory there," the diplomat said.Photos of the vessels have been released by the Norwegian military, taken on Monday. A Norwegian newspaper quoted the head of the Norwegian military intelligence service saying the ships involved "will probably play a role in the deciding battle for Aleppo."Russia, which supports Syrian President Bashar Assad with an air campaign against the Western rebels in the devastated eastern part of Aleppo, has said the deployment will target Islamic State militants in Syria.But the NATO diplomat said the additional military firepower was designed to drive out or destroy the 8,000 rebels in Aleppo, the only large city still in opposition hands, and allow Russian President Vladimir Putin to start a withdrawal.An intensified air campaign in eastern Aleppo, where 275,000 people are trapped, would further worsen ties between Moscow and the West, which says the Kremlin may be responsible for war crimes.NATO officials also say that strategically, Russia's air strikes are securing its interests by protecting Assad and Russia's Syrian port in Tartous, which boosts its access to the Black Sea that it controls after taking the Crimean peninsula."With this assault, it should be enough to allow a Russian exit strategy if Moscow believes Assad is now stable enough to survive," the diplomat said.The fleet off Norway includes Russia's only aircraft carrier, the Admiral Kuznetsov, which is carrying jet fighters, and the Soviet-era nuclear-powered battle cruiser Pyotr Velikiy, or Peter the Great. Other Russian vessels in the group include the anti-submarine warships of the Severomorsk and Vice-Admiral Kulakov and support ships, Russian media has reported.