The woman, who has been detained, has also been shamed by many Saudis on social media for her choice of clothing. 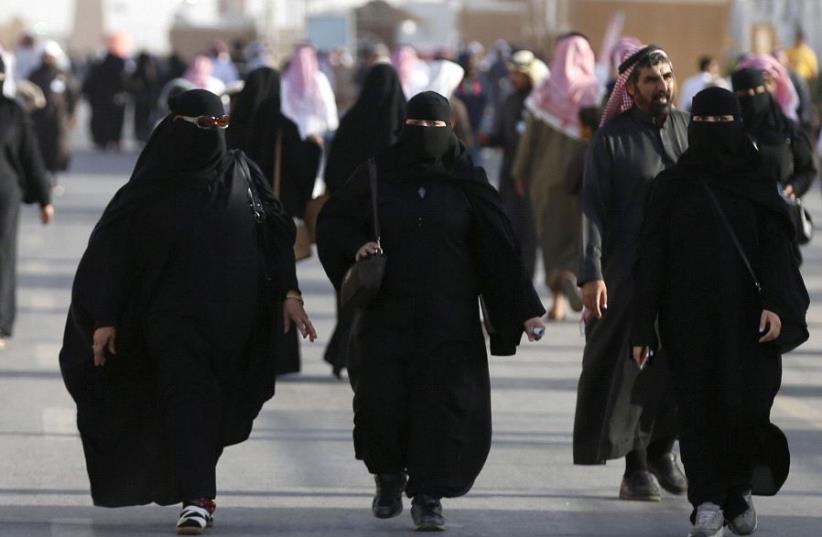 Women wearing traditional Saudi clothing, or an abaya
(photo credit: REUTERS/FAISAL AL NASSER)
Advertisement
A Saudi woman has been arrested for a video that was widely shared online which showed her strolling along an empty street wearing a skirt and crop top, Saudi state TV channel Ekhbariya reported on Tuesday.The clip had incensed some social media users in the conservative Muslim kingdom who vented their anger using the hashtag "Model Khulood must be tried" -- a reference to what they said was the woman's Snapchat name.Many of those critics shared images of the video with her bare legs and midriff blurred out or painted over.In the video, the unidentified woman walks alone through a street flanked by mud-brick walls, in what users identified as Ushaiqir, a heritage village and day-trip destination outside the capital Riyadh.

"Riyadh police have detained the woman who appeared in indecent clothing in Ushaiqir and referred her to the public prosecutor," Ekhbariya said on its official Twitter account, including the popular hashtag.Home to Islam's holy cities of Mecca and Medina, the kingdom cleaves to a strict interpretation of Islam and requires Saudi women to wear conservative dress and bans them from driving.