Susan Rice to PM Netanyahu: Only two-state solution can bring peace with Palestinians

US National Security Adviser is in Israel with other top American officials to report on the progress with Iran over its nuclear program. 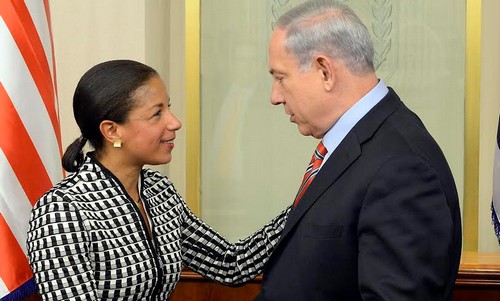 (Photo: Susan Rice with Binyamin Netanyahu, May 7, 2014)Not reaching a nuclear agreement with Iran is preferable to signing a bad accord, Prime Minister Binyamin Netanyahu said Wednesday, soon after meeting with visiting US National Security Advisor Susan Rice.Rice arrived in the country earlier in the day as part of a high-level US delegation.Members of the delegation came to consult with their Israeli counterparts about Iran and other strategic issues prior to another round of talks between the P5+1 and Iran in Vienna next week, and as work went on to formulate a final nuclear deal.Following the Rice meeting – a meeting the Prime Minister’s Office was not willing to discuss – Netanyahu met with a delegation from the Friends of the Israel Defense Forces (FIDF). The brief statement issued about that meeting made the gist of Netanyahu’s message to Rice clear.“Iran seeks to destroy the State of Israel and builds atomic bombs for that purpose,” Netanyahu said. “I want to reiterate Israel’s position: We think that Iran must not have the capacity to make atomic bombs. Iran today has thousands of centrifuges, thousands of kilograms of enriched uranium to make a bomb. A bad deal would let them keep those capacities. It’s better to have no deal than a bad deal.”    (Video: US Embassy, Tel Aviv)Israel is demanding that Iran be denied any enrichment capacities to ensure that it not have the capability to manufacture a bomb. The US and the rest of the P5+1 – Russia, China, Britain, Germany and France – have reconciled to Iran retaining some uranium enrichment capabilities.The White House said after the Rice-Netanyahu meeting that the two discussed “a wide range of regional and bilateral issues, including the United States and Israel’s close security cooperation.” The statement said this cooperation has been “unprecedented under President Obama’s leadership.”On Iran the White House statement said: “Rice emphasized the critical importance of pursuing a comprehensive solution that assures the international community that Iran’s nuclear program is exclusively peaceful.”Emily Landau, an authority on nuclear proliferation, arms control efforts and regional security at the Institute for National Security Studies in Tel Aviv, said in a conference call organized by the advocacy group The Israel Project that one issue of major concern in Jerusalem is verification.According to Landau, the US was placing a great deal of importance in verification mechanisms for a final nuclear deal with Iran. But Israel, she said, had less trust in verification because of concerns about imperfect intelligence and the difficulties of independently verifying compliance.The sense in Jerusalem, she said, was that there was an “over-emphasis” on verification rather than on dismantling critical elements of Iran’s nuclear infrastructure.The White House statement said that Rice had reiterated to Netanyahu that the US “will not allow Iran to acquire a nuclear weapon and that diplomacy is the best way to resolve the international community’s concerns peacefully.”It said she also assured him that the US would be consulting closely with Jerusalem as the negotiations continued.Rice, on her first visit to Israel since becoming national security advisor in July 2013, is expected to meet Thursday in Ramallah with Palestinian Authority President Mahmoud Abbas.Regarding the negotiations with the Palestinians, Rice – who up until now has not played a prominent role in the talks – told Netanyahu that “while we have come to a pause in the parties’ talks, the Untied States remains convinced that lasting peace can only be secured through direct negotiations that lead to two viable, independent states living side-by-side in peace and security.”Netanyahu, in his meeting with the FIDF delegation, said Israel’s “minimal requirement” in negotiations with the Palestinians was for Abbas to recognize the Jewish state.“The other day,” Netanyahu told the delegation, “Abu Mazen [Abbas] said: ‘I’m not even going to negotiate recognizing the Jewish state,’ and then he went to a deal with Hamas.”Meanwhile, Quartet envoy Tony Blair, in an interview on Channel 2, backed Israel’s position about refusing to deal with a Palestinian “technocratic” government backed by Hamas.“A technocratic government doesn’t handle the negotiation,” he said, “so that if you really want a peace negotiation, it really only is a negotiation conducted by people who believe in peace.”Rice also met Wednesday with President Shimon Peres and announced that he would be visiting the White House on June 25.Peres will be leaving office shortly after that date.