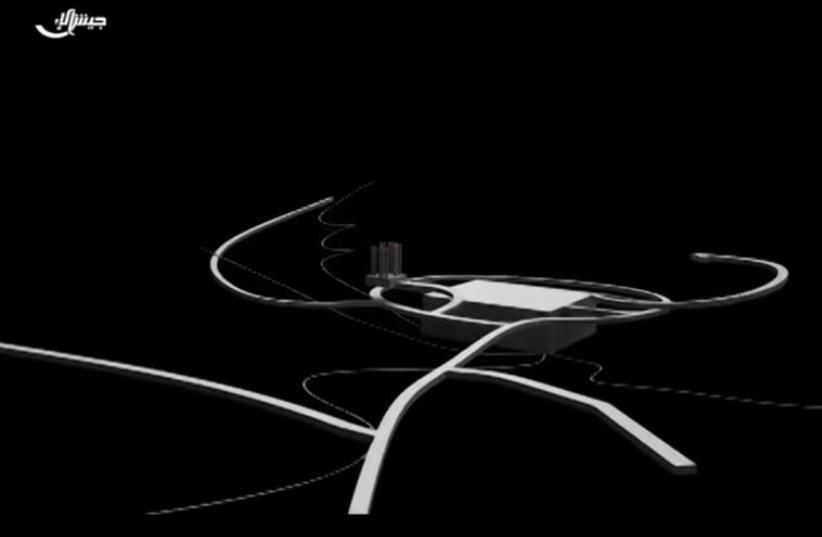 Illustration of alleged underground military complex built by the Assad regime near Damascus
(photo credit: screenshot)
Advertisement
The largest Islamist rebel group in the Syrian civil war, Jaish al-Islam, recently revealed what it claims is a clandestine underground base built by President Bashar Assad's regime near Damascus.In an Arabic documentary film released last week, the group appears to reveal a small military base built to house military and political leaders under the Syrian capital. Jaysh al-Islam claims in the documentary that it has taken control of the compound located near the Harasta neighborhood of a Damascus suburb, colloquially known as "the Assad neighborhood."In minute 37, the film shows an illustration of the purported secret military base, which the rebel group says is accessible through a reinforced helipad that acts as an elevator reaching a series of elaborate underground passageways.
The seven-story complex reportedly includes various command centers and an escape route leading into the mountains in the outskirts of Damascus. "This underground base is indestructible by any type of weapon," Jaish al-Islam field officer Abu Samir says in the film. "After we entered the tunnels, our fighters were surprised to find pathways for vehicles and roads with a length of three kilometers."He adds that his operative discovered five large areas with chemical decontamination chambers. "The compound was built to be a comprehensive control center, from where the Syrian military staff can operate all wartime activities," the rebel official says. "The structure also includes offices for the Intelligence Corps, an office responsible for chemical weapons, artillery, tanks and political leadership," he claims.