The fire was apparently started by several youths from a local Lebanese family following a fight that broke out between a member of the family and Syrian refugee workers. 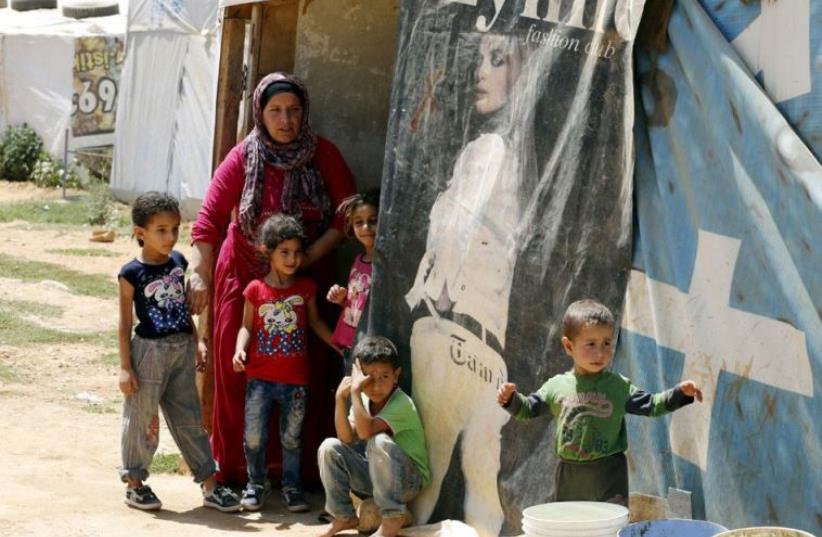 Syrian refugees shelter in a makeshift tent in the Bekaa Valley, part of the 1.15 million refugees being hosted by Lebanon
(photo credit: MOHAMED AZAKIR / REUTERS)
Advertisement
Hundreds of refugees were displaced after a Syrian refugee camp in northern Lebanon was set on fire on Saturday night, Agence France Presse (AFP) reported. The fire was apparently started by several youths from a local Lebanese family following a fight that broke out between a member of the family and Syrian refugee workers from the camp.

A #Syrian refugee camp in northern #Lebanon has been set on fire following a fight between members of the camp and a local Lebanese family. https://t.co/WFGH3NOkLW

The incident took place in a refugee camp that housed 75 families in the Miniyeh region in northern Lebanon and was confirmed by the United Nations High Commissioner for Refugees (UNHCR). The agency noted that the incident led to several injuries and that a few injured individuals were evacuated to a nearby hospital, but an exact number was not specified. Considering the poor living conditions common in such camps - mostly made of plastic sheeting and wood - it's likely that the fire spread quite quickly, reaching all corners of the camp and affecting all of its inhabitants in one way or another.

#Breaking Clashes between Lebanese and Syrian Refugee Camp in #Tripoli Gun Fire head in the area and the camp is on fire now pic.twitter.com/UgIrgHChJW

"The fire has spread to all the tented shelters," UNHCR spokesman Khaled Kabbara told AFP. The report noted that Lebanese Civil Defense arrived at the scene and attempted to control the blazing fire while police and military forces were deployed to the camp to restore calm and assist logistically. What led to the altercation between the Lebanese family and Syrians refugees is not exactly known at this point. According to a statement given to AFP by a security official, the fight was sparked when a few Syrian refugees demanded more money for their work, which their Lebanese employees refused to pay. But other indications point to a potential harassment of a Syrian woman from the camp that led to the fight and its devastating consequences. "Some families have fled the area out of fear because there were also sounds of explosions caused by household gas canisters blowing up," Kabbara said.Lebanon hosts a million registered Syrian refugees according to the UNHCR, or roughly a quarter of the population, who have been fleeing the war in neighboring Syria since 2011. The government puts the number at 1.5 million.