Security forces also killed 15 people and arrested seven others during a raid which targeted "highly dangerous terrorists" in the central Sinai area. 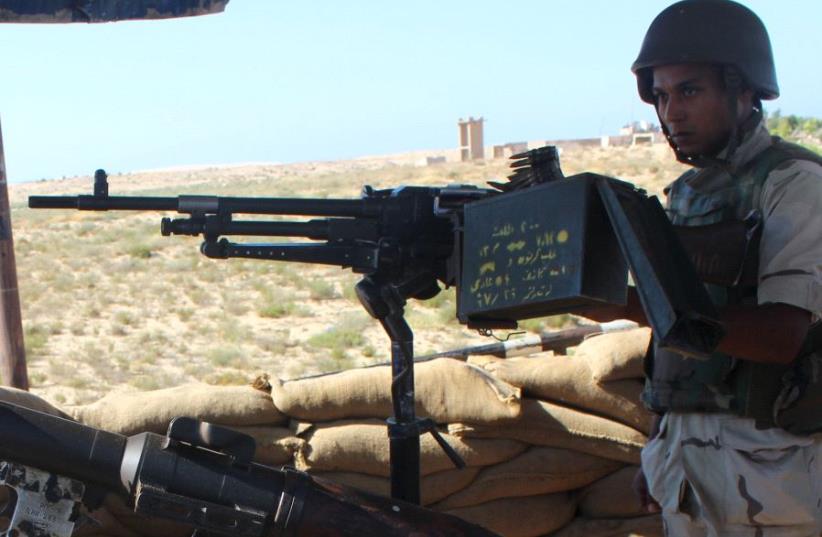 An Egyptian army soldier looks on from his postion at a checkpoint in Al Arish city, the troubled northern part of the Sinai peninsula
(photo credit: REUTERS)
Advertisement
CAIRO - Ten members of Egypt's security forces were killed when their vehicles were hit by two improvised bombs during a military operation against suspected militants in the Sinai peninsula, the army said on Thursday.It said the security forces also killed 15 people and arrested seven others during the raid which it said targeted "highly dangerous terrorists" in the central Sinai area.Egypt is battling an Islamist insurgency in the rugged and thinly populated Northern Sinai, which gained pace after the military overthrew President Mohamed Morsi of the Muslim Brotherhood in 2013 following mass protests against his rule.The militant group staging the insurgency pledged allegiance to Islamic State in 2014 and adopted the name Sinai Province. It is blamed for the killing of hundreds of soldiers and policemen.President Abdel Fattah al-Sisi, the former military chief who led the overthrow of Morsi, describes Islamist militancy as an existential threat to Egypt, an ally of the United States. Islamic State controls large parts of Iraq and Syria and has a strong presence in Libya, which borders Egypt.A military spokesman said the security forces also found and destroyed half a ton of TNT explosive, and seized two four-wheel drive cars containing hand grenades and hundreds of mobile phones.