Washington needs to address concerns that nuclear deal would re-order longtime partnerships, and the United States would gradually turn away from its traditional Sunni allies to focus on Iran. 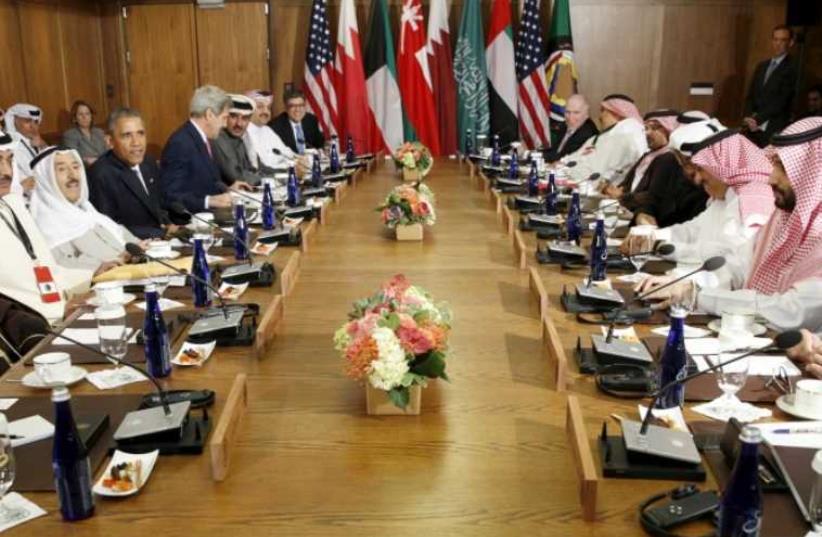 President Barack Obama hosts a working session of the six-nation Gulf Cooperation Council at Camp David in Maryland, May 14, 2015.
(photo credit: REUTERS)
Advertisement
As both US and Iranian military advisers work in Iraq to stop Islamic State forces, their uneasy coexistence underscores how difficult it is to defuse the conflicts roiling the Middle East. To make any headway, Iran must be engaged as a partner. And this engagement starts with Tehran’s Gulf Arab neighbors.The antipathy between predominantly Shi’ite Iran and its neighbors in the largely Sunni Arab Gulf states has a centuries-long history. The tensions are now fueled by Iran’s provocative actions: propping up Syrian President Bashar al-Assad’s forces with arms, money and training; funding groups that launch terrorist attacks across the region, and meddling in Yemen’s affairs. Iran also continues to undermine US efforts to help build a stable Iraqi government — even as Tehran works indirectly with Washington in the fight against Islamic State.The nuclear agreement between Iran and the West, expected in late June, could be a catalyst for addressing these challenges. Under US leadership, the key Gulf powers should take small, deliberate steps to move things forward. Below-the-radar talks, akin to the US-Iran conversations in Oman two years ago, are one likely possibility. Talks on the margins of larger diplomatic meetings are another – and could start during the annual Manama dialogue, when all the Gulf region nations convene.Iranian Foreign Minister Mohammad Javad Zarif has repeatedly said Tehran wants talks with its Gulf neighbors about ending the conflicts in Syria and Yemen. Federica Mogherini, the European Union foreign-policy chief, has also called for Iran to play a role in a political transition in Syria. Yet the Gulf Arabs will likely find it difficult to trust Tehran until it demonstrates good intentions.One major concern of the Gulf states, for example, is that an accident at an Iranian nuclear reactor would contaminate regional water and air. The new agreement’s heightened transparency should help address this. It would also remove any reason for Iran not to sign the Convention on Nuclear Safety, the 1994 International Atomic Energy Agency treaty. It is inexcusable that Iran should be the only nation outside the convention operating a nuclear power plant.Iran could also demonstrate goodwill by inviting its neighbors to joint safety reviews of its nuclear facilities. Tehran said in February that it was ready to establish a regional safety pact to monitor nuclear facilities. How to set up these inspections could be a productive topic for regional dialogue.The United Arab Emirates could be Iran’s model for nuclear transparency. In addition to adhering to all atomic energy agency rules on safety, security and nonproliferation, the Emirates’ national report to the Convention on Nuclear Safety shows it is meeting international benchmarks.The Gulf Arab states most anxious about Iran’s foreign forays are necessary partners for any regional dialogue. The Emirates, for example, has expressed unease as talks with Iran moved forward, yet it also hosts a sizeable Iranian expatriate community with strong commercial ties to Iran.The Saudi succession shakeup that made the former US ambassador, Adel al-Jubeir, the kingdom’s new foreign minister offers another opportunity to cement a constructive approach toward Iran. Despite current tensions with Washington, Saudi Arabia remains an ally that understands the need to limit Iran’s reach through diplomacy and nonmilitary means wherever possible.For its part, the United States must continue to demonstrate that a nuclear deal with Iran does not mean abandonment of the Gulf Arab states. Washington needs to address persistent concerns that the nuclear deal would re-order longtime partnerships, and the United States would gradually turn away from its traditional Sunni allies to focus on Iran.It is vital that Washington make clear that even though the United States has overlapping interests with Iran, it also has longstanding differences that are not easily eliminated. The news that the White House plans to discuss at the Camp David summit meeting on May 14 expanded defense cooperation and intelligence sharing with Gulf states should help allay at least some of these worries.The Camp David meeting will likely focus on Arab desires for security assurances and military hardware. There could also be frank discussions about Iranian intentions in the region and how to counter them. Bringing up “soft power” issues, such as nuclear safety, is one way for Washington to help bring Iran and the Gulf states to the table together.