Turkey in crisis: A coup with sweeping consequences

In the coming hours, narrative ownership will be critical, as both sides claim to be fighting to protect democracy and the rule of law in Turkey. 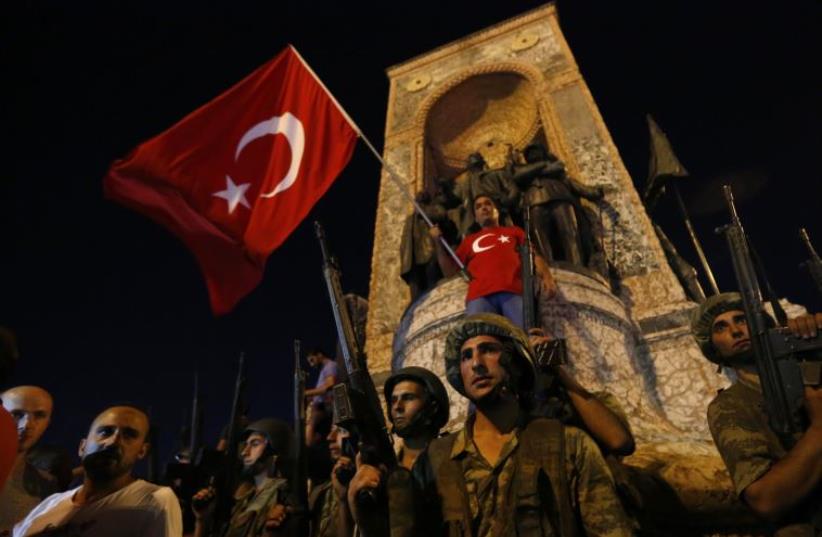 Turkish military stand guard near the the Taksim Square as people wave with Turkish flags in Istanbul, Turkey, July 16, 2016
(photo credit: REUTERS)
Advertisement
WASHINGTON -- The stunning military coup d'etat unfolding in Turkey will reverberate in all directions should it succeed– through the Black Sea to Russia, through the Balkans into Europe, and through Syria into the greater Middle East.
In the coming hours, narrative ownership will be critical, as both sides claim to be fighting to protect democracy and the rule of law in Turkey.
Despite severe media censorship and efforts to suppress political opposition, Erdogan has repeatedly secured power by legitimate electoral means, according to the Organization for Security and Co-operation in Europe, which monitors the country's elections.
Yet precisely that censorship– as well as a series of 17 bombings that have killed over 300 people and wounded over 1,000 in just over a year– are the stated reasons behind the military coup, which took the country by surprise as fighter jets zoomed over the capital of Ankara and tanks closed down Istanbul's Ataturk Airport.
Local reports suggest the military is divided over this coup attempt– although such a choreographed effort might suggest otherwise. Regardless, significant protests in several cities are defying the military's declaration of a curfew and martial law.
A critical NATO ally, Turkey hosts a strategically vital airbase in its south for the US-led coalition against Islamic State. The Defense Department is lawfully required to withdraw from operations in any nation which has undergone a successful coup, and the State Department is, in turn, required to cut all of its foreign aid.
The NATO alliance states that its basic principles for membership are "democracy, individual liberty and rule of law." A coup attempt would undermine the legitimacy of Turkey's government and challenge the alliance at a time when it already faces heightened stresses from Russia.
Turkey hosts more Syrian refugees than any other nation, and in March agreed with the European Union to receive undocumented migrants who travel into the EU through its territory in exchange for registered refugees. Since the deal served as a stopgap for Europe's crippling refugee crisis, there is no telling what effects an internal Turkish crisis will have on that refugee flow.
Russian oil and military transfers through the Bosphorus Strait are so significant, they warranted Moscow's invasion of Ukraine and full annexation of the Crimea peninsula in 2014. Disruption of Bosphorus traffic, from a Turkish military less than friendly to Russia, could provoke tensions in the Black Sea not seen since the end of the Cold War.
And only last month, Turkey finalized a deal with Israel to normalize relations for the first time since a crisis over Israel's raid of a flotilla in 2010. Turkish local journalists asserted on social media that several military figures oppose the new agreement.
The Obama administration's swift decision to support Erdogan must have been a difficult call: While he was democratically elected, US and EU officials have been vocal with their concerns over Erdogan's apparent disinterest in democratic institutions.
But Western support for his government– expressed so early on in this precarious moment for Turkey– may be enough to tip the scales of this crisis in his favor. If it isn't, a successful military takeover will be felt worldwide and in short order, making the 2013 coup in Egypt against then-President Mohamed Morsi look like child's play.