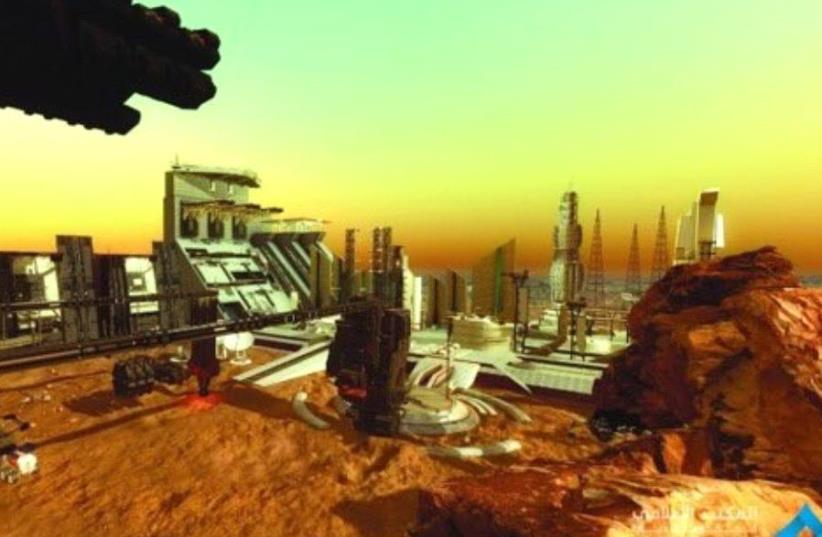 Presentation of the UAE project 'Mars 2117'
(photo credit: TWITTER/DUBAI MEDIA OFFICE)
Advertisement
The UAE’s top artificial intelligence official told an Israel-sponsored conference on Monday that her country’s recent and future space successes include the use of AI capabilities.
Speaking at Tel Aviv University’s Artificial Intelligence Week virtual conference, Sumaya al-Hajeri, UAE’s Head of Governance and Data at the Office of the Minister of Artificial Intelligence gave a detailed explanation of her country’s AI initiatives, including assisting with the UAE’s recent successful voyage to Mars. Its Hope orbiter launched last July reached Mars two weeks ago, ahead of NASA’s Perseverance.
Al-Hajeri said that the UAE’s space agency had used AI to simulate a variety of scenarios to help anticipate problems and reduce risks.
In addition, she said that AI was a major area for future cooperation between Dubai and Jerusalem.
Al-Hajeri was another in the line of Arab officials extending the relatively new trend of appearing alongside Israelis in public to discuss issues unconnected with Middle East politics but very connected with Middle East economic and technological developments.
Al-Hajeri said that the UAE was offering global AI companies designated safe areas where they could freely test autonomous vehicles without fear of injuring people.
Also, at the conference Tel Aviv University cyber and AI director Maj.-Gen. (ret.) Yitzhak Ben-Israel talked about his efforts to make Israel into a top AI power as part of a task force set up by Prime Minister Benjamin Netanyahu.
Ben Israel said, “there is no part of today’s world that isn’t affected by AI, and every nation needs to understand that.”
He added that the pandemic had accelerated the necessity to turn over more and more functions to AI.
Former PMO cyber chief and current Tel Aviv University Security Program official Eviatar Metania said that though Israel could not invest in every AI field like the US, EU and China, it could excel in specific fields where it has comparative advantages.
He said that he and Ben-Israel had recommended that the government invest 20% of its research and development budget in AI, especially in quantum computing, communications, infrastructure and human capital.
Moreover, Metania said his colleagues were working with academia to make sure students and advanced researchers focused on areas which would best serve Israel’s national interests.
Head of the UK’s Office for Artificial Intelligence Sana Khareghani spoke to the conference about England’s trusted data-sharing initiative as well as its Center for Data Ethics.
Khareghani said that it is important for governments to keep abreast of ethical issues and to establish norms and legal frameworks for the AI industry.
In addition, she said that the UK was trying to support and retrain workers from technological sectors which were being “disrupted” by AI.