Intra-Syrian negotiations will continue in Geneva through the beginning of next week. 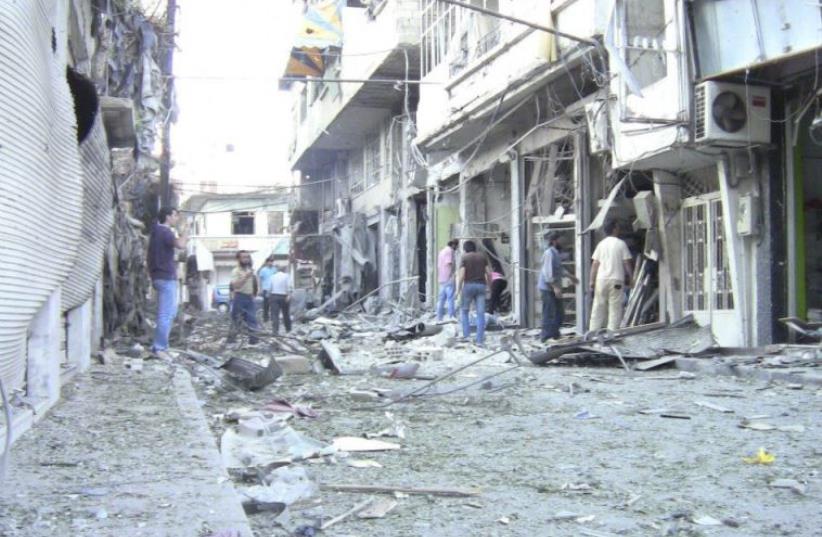 Damaged buildings in Al-Zabadani, Syria (file)
(photo credit: REUTERS)
Advertisement
GENEVA/ATHENS – International efforts to end Syria’s civil war appear shakier than ever, but the UN’s special envoy to the crisis, Staffan de Mistura, refuses to call it quits just yet.Intra-Syrian negotiations will continue in Geneva through the middle of this week, de Mistura said on Thursday. But they proceed without an intra-Syrian presence.Political leadership of the opposition to President Bashar Assad, represented by the Saudi-organized High Negotiations Committee, left the Swiss city on Tuesday and left only a technical team behind.That will suffice for de Mistura, however, who explained in a briefing with reporters why he rejects talk of a collapse in the diplomatic effort.“Let’s remember the central point for us is to get as many as possible ideas, concepts, any type of possible vision of what could be either the transitional governing body or – what the government seems to be referring to – the government of broad-base,” he said.Thus far, de Mistura has been brokering “proximity talks” – shuttling back before conference and hotel rooms in downtown Geneva and the UN’s Palais de Nations headquarters, where Assad regime and opposition officials are camped out in separate rooms.“The secret for us and the usefulness of these proximity talks is to get the respective visions of what is their view of the political transition, and that is what we have been working on,” he continued.The goal, another UN official explained, is to put to paper precisely how the opposition and the Assad government each envision a Syrian unity government. Those papers will then be compared at the end of the talks, when de Mistura hopes to identify common ground.But unlike many negotiations, the devil is not in the details when it comes to this particular effort. On the contrary, it lies squarely in the Syrian president’s office: It all comes down to whether he will stay in Damascus or go into exile.The High Negotiations Committee says the war will continue unless and until Assad dies, departs office, or announces he will not run for reelection. Opposition leadership says it is willing to enter into a unity government with members of Assad’s government who have not participated in war crimes.Assad’s delegation to Geneva, on the other hand, has consistently ruled out discussing his departure.Before this round of proximity talks began, US Secretary of State John Kerry characterized them as Assad’s last chance to demonstrate he is capable of negotiating in good faith.But over the course of the last month, a rapid deterioration of a temporary truce between the two sides has diminished the chances of success.On Thursday, after speaking with a senior representative of Syria’s opposition, US Senate Foreign Relations Committee chairman Bob Corker said the two-month-old cessation of hostilities appeared “effectively dead.”“The Assad regime continues to target civilians, block humanitarian aid access, and refuse the release of detainees,” Corker said. “It looks like it’s time to consider what Secretary Kerry referred to as Plan B, and I look forward to him laying that out very soon.”In congressional testimony in February, Kerry said the Obama administration was working on alternative policy initiatives – presumably military in nature – should the talks definitively fail.Visiting London on Friday, US President Barack Obama was already referring to the cease-fire in the past tense.“The cessation of hostilities actually held longer than I expected,” Obama said in a joint press conference with British Prime Minister David Cameron. “For seven weeks we’ve seen a significant reduction in violence inside that country. And that gave some relief to people.”Syrian warplanes bombed the rebel-held town of Douma near Damascus and parts of Aleppo in the north on Saturday, killing 23 people, with the death toll likely to rise, the London-based Syrian Observatory for Human Rights said. More than 450,000 people have been killed in Syria’s five-year-old civil war, and some 11 million people turned into refugees.A Western official attending the talks warned that a collapse in this particular round could delay any future negotiation for up to a year.UN officials are preparing for de Mistura to return to Geneva for much of May, presumably for what will be the fourth and final round of talks.