Administration officials cited President al-Sisi’s endorsing in May of a draconian law against nongovernmental organizations when the step was announced. 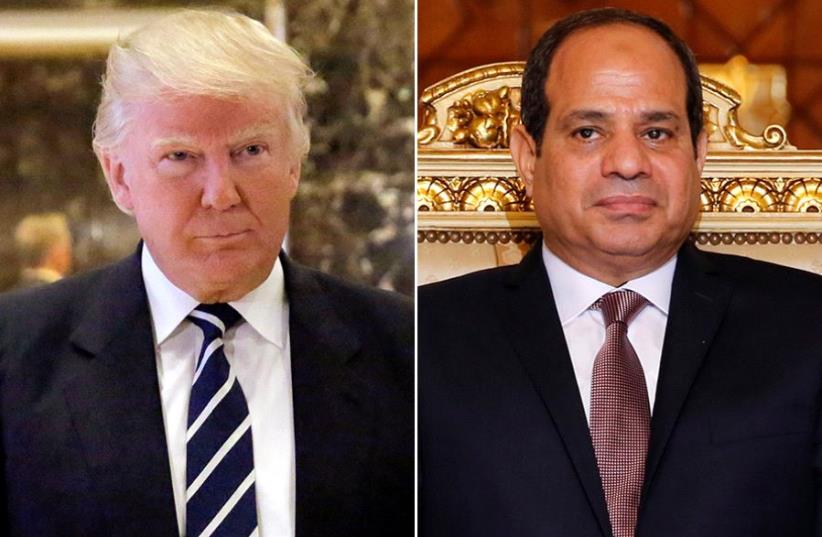 Trump and Sisi
(photo credit: REUTERS)
Advertisement
The Trump administrations announcement last week that it is cutting or delaying nearly $300 million in military and economic aid to Egypt is not expected to impact Cairo’s egregious human-rights record, analysts said Monday.Administration officials cited President Abdel Fattah al-Sisi’s endorsing in May of a draconian law against nongovernmental organizations when the step was announced. A total of $290.7m. in assistance was affected, with $195 million in military aid suspended pending human rights improvements and $95.7m. in economic and military assistance cut entirely, to be redirected to other countries.Egypt’s Foreign Ministry flayed the move as a “misjudgment of the strategic relations that have bound the two countries for decades” but a statement from the Egyptian presidency issued after Sisi met visiting US peace envoy Jared Kushner made no mention of the cut and spoke of Egypt’s “keenness” to continue strengthening bilateral relations.With most of the money continuing to be held for Egypt, as long as it improves its rights record, the move amounts to a “very light slap on the wrist” that is expected to have “no effect at all” on Egyptian human-rights practices, says Sarah Yerkes, a scholar at the Carnegie Endowment for International Peace in Washington, DC.“Their calculation is that the US needs them, that they can do what they want and ride out this storm,” she said. “The Sisi regime knows they’re a big country, an important country in the region, that they have an important role to play in the peace process which is a priority for the administration. It’s clear they need Egypt on their side if they want to get anywhere with the Israeli-Palestinian process.”Yerkes does not envision any further US steps against Egypt. “The administration felt what it needed to do was make noise about human rights, and it checked that box,” she said. “I don’t foresee them doing anything else.”Yerkes said the step may have been taken not so much as a moral stand but rather as a sign of displeasure with Egypt for not sticking to reported assurances Egyptian officials had given the Trump administration that they would make changes to the law before it was signed. In addition, the aid withholding could be a way of signaling Egypt to distance itself from North Korea. “This combination made it an easy decision for the administration to make,” she said.According to Human Rights Watch, the NGO law “effectively prohibits independent non-governmental groups in the country by subjecting their work and funding to control by government authorities, including powerful security agencies.”The law “would effectively ban what remains of the country’s independent civil society groups.” Sisi supporters justify the law as being necessary in order to maintain security and counter the Muslim Brotherhood. It stipulates fines of more than $55,000 and up to five years in prison for violations.Ofir Winter, an Egypt specialist at the Institute for National Security Studies, says the warm reception Sisi received during an April visit to the White House may have been interpreted by him as a “green light” for such laws.“Why does he advance these laws? Because Egypt is an authoritarian state that hardly has freedom of activity outside the supervision of the regime,” he said.Winter said the NGO law is part of a “pattern” of deterioration in a humanrights situation that was already miserable but has become even worse during the last six months with blockage of Internet sites, arrests of journalists and a dearth of free political party activity. He estimates there are 40,000 political prisoners in Egyptian jails.“The authoritarian regime has just intensified recently and it may be related to Trump’s entering office,” he said Of the US aid cuts, he said it seemed hard to believe that they could “change the overall pattern.” But he did not completely rule out some Egyptian response to the US step, noting that Cairo has in the past proven responsive to financial pressure when it came from the Saudis.Yoram Meital, a Middle East specialist at Ben-Gurion University, believes the US step will have no influence on Egypt’s human-rights practices. “Their overall reaction to the Americans will be: ‘you don’t appreciate what is at stake,” he said.“We are fighting Islamic State groups under very difficult circumstances, to the west from Libya and to the east from Sinai. We are in war and you can’t put the focus on human rights while ignoring the context.’” Meital says in Sisi’s world view, Islamic State and the Muslim Brotherhood share the goal of destroying Egypt. “His approach is that there is no other option but to work as if war is happening and under these circumstances, Egyptians should lower their expectations of human rights and democratic values and realize that what has to be done is restore stability and defeat extremism,” he said.Meital predicts that Sisi may try to take advantage of his good relations with Prime Minister Benjamin Netanyahu to enlist the latter’s support in persuading the US to reverse the cuts.