Saudi Arabia has welcomed the lobbying, they said, though it is likely to worry regional rival Iran at a time when tensions are already high in the Middle East. 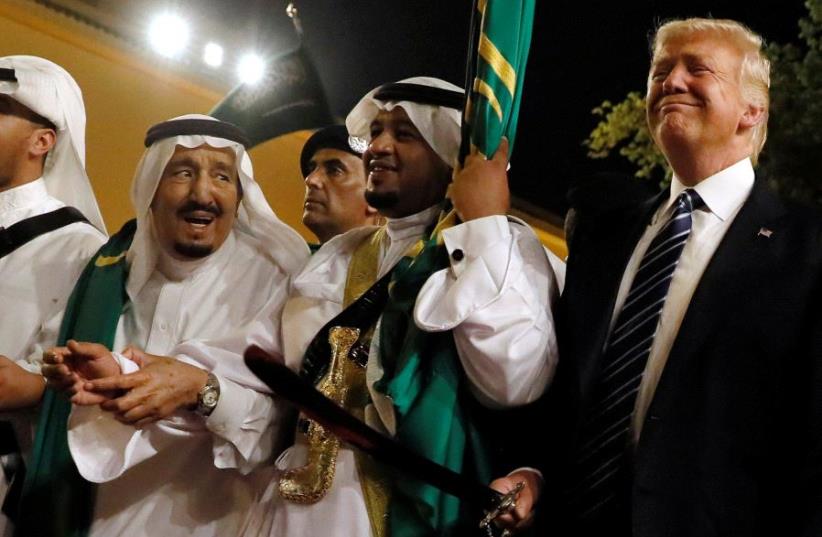 US President Donald Trump pictured dancing with swords at a reception ceremony held in his honor in Saudi Arabia on May 20, 2017.
(photo credit: REUTERS)
Advertisement
RIYADH/DUBAI - US firms attracted by Saudi Arabia's plans to build nuclear reactors are pushing Washington to restart talks with Riyadh on an agreement to help the kingdom develop atomic energy, three industry sources said.Saudi Arabia has welcomed the lobbying, they said, though it is likely to worry regional rival Iran at a time when tensions are already high in the Middle East.One of the sources also said Riyadh had told Washington it does not want to forfeit the possibility of one day enriching uranium - a process that can have military uses - though this is a standard condition of US civil nuclear cooperation pacts."They want to secure enrichment if down the line they want to do it," the source, who is in contact with Saudi and US officials, said before US Energy Secretary Rick Perry holds talks in Riyadh early next week.Another of the industry sources said Saudi Arabia and the United States had already held initial talks about a nuclear cooperation pact.US officials and Saudi officials responsible for nuclear energy issues declined to comment for this article. The sources did not identify the US firms involved in the lobbying.Under Article 123 of the US Atomic Energy Act, a peaceful cooperation agreement is required for the transfer of nuclear materials, technology and equipment.In previous talks, Saudi Arabia has refused to sign up to any agreement with the United States that would deprive the kingdom of the possibility of one day enriching uranium. Saudi Arabia, the world's top oil producer, says it wants nuclear power solely for peaceful uses - to produce electricity at home so that it can export more crude. It has not yet acquired nuclear power or enrichment technology.Riyadh sent a request for information to nuclear reactor suppliers in October in a first step towards opening a multi-billion-dollar tender for two nuclear power reactors, and plans to award the first construction contract in 2018.Reuters has reported that Westinghouse is in talks with other US-based companies to form a consortium for the bid. A downturn in the US nuclear industry makes business abroad increasingly valuable for American firms.Reactors need uranium enriched to around 5 percent purity but the same technology in this process can also be used to enrich the heavy metal to a higher, weapons-grade level. This has been at the heart of Western and regional concerns over the nuclear work of Iran, which enriches uranium domestically.Riyadh's main reason to leave the door open to enrichment in the future may be political - to ensure the Sunni Muslim kingdom has the same possibility of enriching uranium as Shi'ite Muslim Iran, industry sources and analysts say.POTENTIAL PROBLEM FOR WASHINGTONSaudi Arabia's position poses a potential problem for the United States, which has strengthened ties with the kingdom under President Donald Trump.Washington usually requires a country to sign a nuclear cooperation pact - known as a 123 agreement - that forfeits steps in fuel production with potential bomb-making uses."Doing less than this would undermine US credibility and risk the increased spread of nuclear weapons capabilities to Saudi Arabia and the region," said David Albright, a former UN weapons inspector and president of the Washington-based Institute for Science and International Security.It is not clear whether Riyadh will raise the issue during Perry's visit, which one of the industry sources said could include discussion of nuclear export controls. Under a nuclear deal Iran signed in 2015 with world powers - but which Trump has said he might pull the United States out of - Tehran can enrich uranium to around the level needed for commercial power-generation.It would be "a huge change of policy" for Washington to allow Saudi Arabia the right to enrich uranium, said Mark Fitzpatrick, executive director of the Americas office at the International Institute for Strategic Studies think tank."Applying the 'golden standard' of not allowing enrichment or preprocessing (of spent fuel) has held up a 123 agreement with Jordan for many years, and has been a key issue in US nuclear cooperation with South Korea," said Fitzpatrick, a nuclear policy expert.The United States is likely to aim for restrictions, non-proliferation analysts say.These could be based on those included in the 123 agreement Washington signed in 2009 with the United Arab Emirates, which is set to start up its first South Korean-built reactor in 2018 and has ruled out enrichment and reprocessing."Perhaps Saudi Arabia is testing the Trump administration and seeing if the administration would be amenable to fewer restrictions in a 123 agreement," Albright said.REFORM PLANSaudi Arabia's nuclear plans have gained momentum as part of a reform plan led by Crown Prince Mohammed bin Salman to reduce the economy's dependence on oil.Riyadh wants eventually to install up to 17.6 gigawatts (GW) of atomic capacity by 2032 - or up to 17 reactors. This is a promising prospect for the struggling global nuclear industry and the United States is expected to face competition from South Korea, Russia, France and China for the initial tender.Hashim bin Abdullah Yamani, head of the Saudi government agency tasked with the nuclear plans, has said the kingdom wants to tap its own uranium resources for "self-sufficiency in producing nuclear fuel" and that this is economically viable.As a nuclear conference in October, Saudi officials declined to comment when asked to expand on the topic.In 2015, before the Iran deal was signed, Prince Turki al-Faisal, a senior Saudi royal and former intelligence chief, said Riyadh would want the option to enrich uranium if Tehran had it.In October, Maher al-Odan, the chief atomic energy officer of KACARE, said Saudi Arabia had around 60,000 tonnes of uranium based on initial studies and that the kingdom wanted to start extracting it to boost the economy.Asked what would happen to the uranium after that, he replied: "This is a government decision."