Russia and Iran seeking to close nuclear deal in 'hours'

President Obama reportedly told a group of Democratic lawmakers that prospects for a deal are less than 50-50. 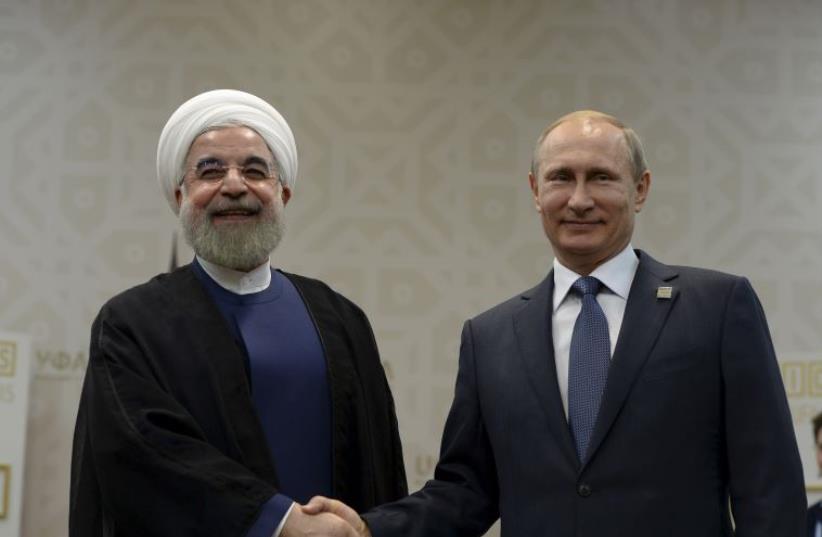 Russian President Vladimir Putin shakes hands with Iran's President Hassan Rouhani during their meeting in Ufa, Russia, July 9, 2015.
(photo credit: REUTERS)
Advertisement
VIENNA -- A United States official has told The Jerusalem Post that the drafting of a final nuclear agreement is not yet complete, despite reports in Russian and Iranian media that a deal could be announced within hours.US Secretary of State John Kerry spoke with Russian Foreign Minister Sergey Lavrov after meeting with their Iranian counterpart, Mohammad Javad Zarif, midday on Thursday. Talks reportedly intensified ahead of a midnight deadline in Washington, by which the US Congress expects an agreement in full.And several diplomats— from both the West and from Iran— described a concerted effort to complete the deal by the end of the night. Past July 9, Congress will have double the amount of time to review and vote on any future agreement, from 30 to 60 days.Kerry was scheduled to address the press at 8:00 p.m. Jerusalem time, 1:00 p.m. EST.
Jpost reporter in Vienna answers readers" questions on Iran talks
Iran's nuclear chief, Ali Akbar Salehi, told press here that, "hopefully, today is the last day" of talks, as he entered his fourteenth straight day of negotiations. His US counterpart, Energy Secretary Ernest Moniz, also said he was hopeful they could resolve a handful of remaining challenges.A Western diplomat said that talks were stuck on just five issues or less, including Iran's insistence that a United Nations arms embargo be lifted along with sanctions directly related to Tehran's nuclear work.Russia seeks to sell conventional weapons systems to Iran and publicly supports lifting the embargo. Iranian President Hassan Rouhani thanked Russian President Vladimir Putin for his efforts in furthering the nuclear talks on Thursday during a visit to the city of Ufa for the annual BRICS summit.Iranian media produced frenzied reports on Thursday, beginning with the assertion that a deal was imminent. "96 percent" of all annexes for the deal were complete, state-run outlets reported. They later said that a deal was unlikely by the end of the day.US President Barack Obama teleconferenced with his team in Vienna to provide them with "guidance" on Wednesday afternoon. The day before, he reportedly told a group of Democratic lawmakers that prospects for a deal are less than 50-50.All parties agree that, regardless of the specific date and time, the moment has come to determine whether closing an agreement is possible.