The Syrian issue was top priority on the first day of the conference. 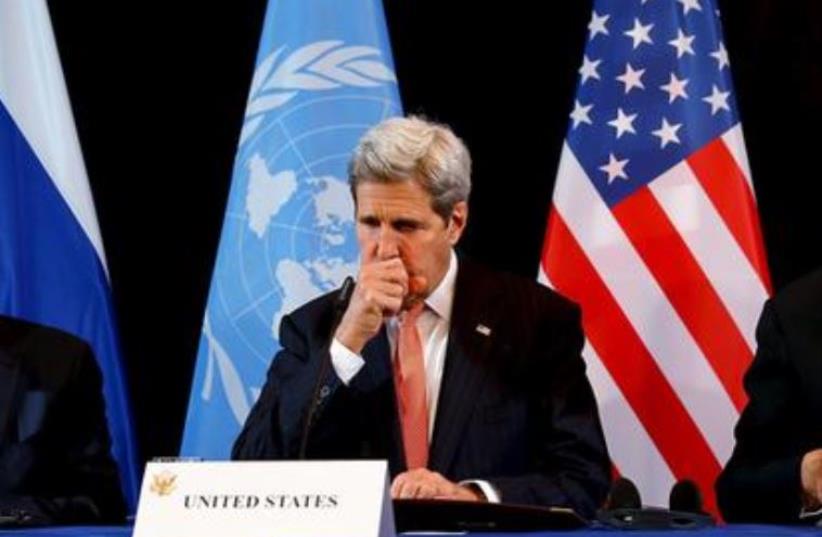 US Secretary of State John Kerry in Munich, Germany, February 12, 2016.
(photo credit: REUTERS)
Advertisement
Representatives from world powers, including US Secretary of State John Kerry, Israel Defense Minister Moshe Ya'alon, NATO Secretary General Jens Stoltenberg and Iraqi Prime Minister Haider al-Abadi, arrived in Munich Friday for the city's annual security conference.Kerry arrived at the venue following a night of marathon talks that included Russia and more than a dozen other countries.He said earlier on Friday that an international meeting on the Syria crisis held on the sidelines of the security conference had agreed to implement a "cessation of hostilities" in Syria and to immediately expand delivery of humanitarian aid.If implemented, the deal hammered out at five hours of late night talks in Munich would allow humanitarian aid to reach besieged towns. It was described by the countries that took part as a rare diplomatic success in a conflict that has fractured the Middle East, killed at least 250,000 people, made 11 million homeless and sent hundreds of thousands fleeing into Europe.The Syrian issue was the top priority on the first day of the conference.European Union (EU) foreign affairs chief Federica Mogherini and Iran's Foreign Minister Mohammad Javad Zarif reiterated their represented stances on solving the Syrian crisis.Mogherini hoped the Gulf countries can improve relations, strengthen regional cooperation and make concerted efforts to solve the Syrian crisis.Zarif said Iran is willing to restore relations with Saudi Arabia. He said Iran and Saudi Arabia share common interests in combating Islamic terrorism and rebuilding peace in Syria.Chief of staff of German Chancellor Angela Merkel's office and refugee coordinator of the German government Peter Altmaier, in his talks with Turkish Foreign Minister Mevlut Cavusoglu, spoke highly of Turkey's efforts and expressed the hope that Turkey can further help prevent refugees from flocking into Europe.Russian Prime Minister Dmitry Medvedev, though had not been officially present at the ongoing MSC, said during an interview by German newspaper Handelsblatt that if the United States and its Arabic allies send ground troops to Syria, that would result in world war.The Syrian conflict has killed around 250,000 people since 2011 and driven about 4.3 million refugees escaping to other countries, according to statistics of the United Nations, and at least 7.6 million people have been displaced in Syria.