By YAAKOV KATZ, BEN HARTMAN, JOANNA PARASZCZUK
Mustafa Tamimi being shot with tear gas in Nebi Salah 311
(photo credit: REUTERS/Haim Schwartzenberg)
Advertisement
A Palestinian protester wounded during a demonstration in the West Bank on Friday died of his wounds on Saturday. The IDF has launched an investigation into the incident.The dead man was identified as 28-year-old Mustafa Tamimi. 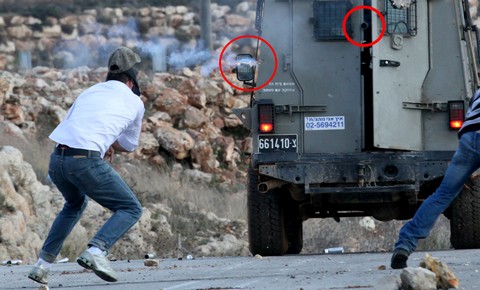 Tamimi (left) a moment before his injury; Emphasis on barrels added by Popular Struggle Coordination Committee.
IDF sources said that Tamimi was wounded during a violent demonstration against Israeli security forces near the village of Nabi Salah in Samaria.Soldiers and border policemen fired tear gas to disperse the demonstrations.Palestinians said that Tamimi was hit in the face by a gas canister.RELATED:2,000 turn out for Human Rights March in Tel Aviv IDF troops treated him at the scene and he was later evacuated to the Rabin Medical Center-Beilinson Campus in Petah Tikva, where he died.IDF sources said that Tamimi had thrown a number of rocks at security forces and that a slingshot was found on his body when he was taken to the hospital.The Central Command was investigating the incident and looking into whether the tear gas canister was fired directly at Tamimi in violation of IDF rules of engagement.Tear gas canisters are supposed to be fired in the vicinity of the protesters but not directly at them, to prevent fatal injuries. 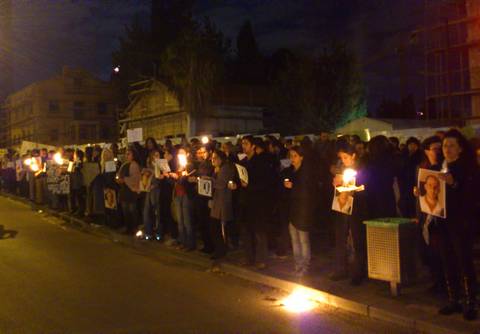 Candle-light vigil for Mustafa Tamimi at Defense Ministry in TA (Photo: Ben Hartman)
On Saturday evening, Yesh Din – Volunteers for Human Rights slammed Tamimi’s killing, and likened it to the death of Palestinian Bassem Abu Rahma, who was also hit by a tear gas canister during a protest in the West Bank town of Bil’in two years ago.“Unfortunately, a year after Abu Rahma was killed, the military advocate-general decided not to investigate the incident and only returned to it after Yesh Din filed expert opinions that showed the shooting was direct fire and threatened to petition the High Court,” said Yesh Din spokeswoman Hila Aloni, who called on the Military Advocate-General’s Office to immediately open an investigation into Tamimi’s death.Also on Saturday, around 100 protesters held a candlelight vigil outside the Defense Ministry in Tel Aviv.Holding candles and pictures of Tamimi, many of which read “Murdered by the occupation army,” the protesters chanted, “[Defense Minister Ehud] Barak, you murderer, the intifada will be victorious,” and, “the IDF is a terror organization,” among other slogans.