Hours after hacker OxOmar sends warning to the 'Post', Tel Aviv Stock Exchange and ElAl websites appear to be down; ElAl says "a cyber war has been waged against the State of Israel."

By YAAKOV LAPPIN
JANUARY 16, 2012 10:45
keyboard computer Internet cyber warfare 311
(photo credit: Thinkstock/Imagebank)
Advertisement
Hours after anti-Israel hackers said they would strike the websites of the Tel Aviv Stock Exchange and El Al, both sites were taken offline overnight on Monday.The Tel Aviv Stock Exchange website made a swift recovery and was back online by Monday morning, but the El Al website remained unavailable into the morning. 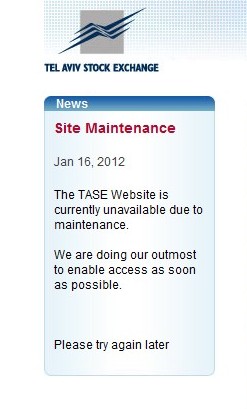 TASE The prominent hacker 0xOmar, who has been at the forefront of an Internet assault on Israel, and who released tens of thousands of Israeli credit card numbers last month, sent an email to The Jerusalem Post before the attack.He said he had been joined by a hacking team called "Nightmare." The new group "promised to take down" the two websites by morning, he added.El Al released a statement saying it was aware that "a cyber war has been waged against the State of Israel for two weeks. El Al is closely monitoring the activities of the Saudi hacker [0xOmar]." El Al said steps being taken to fortify its official website "could cause disruptions to the website's activities." Both websites supply key information to members of the public, and their attack represents an escalation in the web war being waged against Israel.

El Al Israeli hackers have said in recent days that they will launch their own attacks against Arab hackers in the event of future hacking incidents against Israelis.Meanwhile, a Jewish pro-Israel hacker named Hannibal published information enabling web users to break into the  accounts of 20,000 Arab Facebook users.Hannibal said he held information that would allow for the breaking in to 10 million Iranian and Saudi bank accounts, and threatened to cause billions of dollars worth of damages.